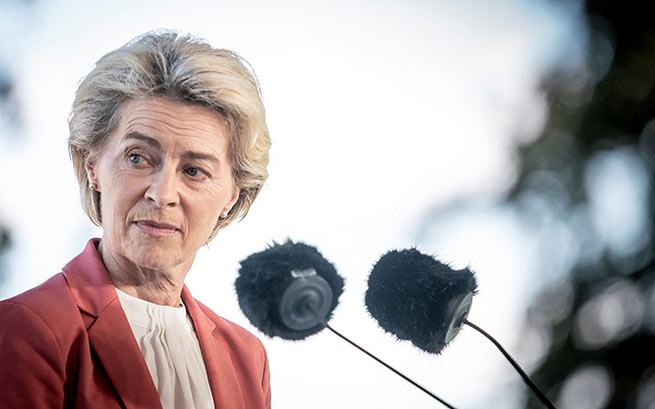 “The time has come to set a ceiling price for Russian gas imported to Europe via pipeline”said today the President of the European Union Ursula von der Leyen. Htoby EU could resist what she called the attempts of the President of Russia Vladimir Putin manipulate the European energy market.

“I firmly believe that the time has come to limit the flow of Russian natural gas to Europe through pipelines,” von der Leyen told reporters on the sidelines of a conference of conservative German parliamentarians in Murnau.

Russia threatens to completely cut off gas supplies to Europe

Former Russian President Dmitry Medvedev said Russia would cut off gas supplies to Europe if Brussels imposed restrictions. In response to comments by European Commission President Ursula von der Leyen about capping the price Europe pays for gas, Medvedev wrote on messaging app Telegram: “There will simply be no Russian gas in Europe.”

Should the EU impose a cap on gas prices

Energy prices in the EU rose sharply after Russia’s invasion of Ukraine in February this year. In fact, over the past few days, the cost of electricity in the European Union has been ten times higher than the average for the past decade. This is mainly due to rising gas prices.

As consumers bear an increasing financial burden, EU leaders are being called for action to curb excessive energy costs. How could they do it? “One way is to limit the price of gas for electricity,” the Gzero website said in an analysis. One proposal, put forward by outgoing Italian Prime Minister Mario Draghi, is to set a cap on Russian gas bought by EU energy companies.

Such a move would limit Moscow’s negotiating possibilities with respect to the EU. At the same time, however, it would also be fraught with the possibility of “retaliatory measures” from Russia, such as, for example, the complete cessation of Russian gas supplies by Moscow to the EU (we have already seen examples of this in the repeated – perhaps imaginary – supply interruptions Russian gas via Nord Stream 1).

Another, more popular, but also more populist, according to Gzero, option is to set a cap on the price of gas used to generate electricity, regardless of country of origin. In this case, EU governments would pay energy companies the difference between this limit and the higher gas price so that they would not have to pass the cost on to consumers. Belgian Prime Minister Alexandre de Croix again called for a European solution to the energy crisis, speaking on rtl radio:

“We are facing something that we have never seen before, but the solution will be found at the international level, and therefore in Europe, by intervening in the gas market.”

Proposals considered by the commission

According to K, the two already successfully implemented southern models, Greek and Iberian, plus the Greek proposal presented to the Energy Council in July by Kostas Skrekas, are being considered by the commission in the context of formulating proposals for a pan-European response to the energy crisis.

For the first time in a long and deep energy crisis, the EU appears to be open to all available price de-escalation options, removing the marginal market pricing model protection it has generously provided all along, backing the north against the south’s demands for structural change.

According to a commission document cited by Reuters, the EU is considering the Greek model as a measure of direct intervention, which provides for the establishment of a limit on each electricity generation technology, up to which producers return money. And the difference from the marginal price, determined each time for expensive gas, is collected by the state and sent through the Energy Transition Fund (ETF) to subsidize electricity bills.

“The intervention would impose a price cap on power generation technologies that have lower operating costs (ie lignite, renewables, etc.) than gas-fired power plants,” the document says. The purpose of the intervention is to decouple the commercial benefit from the current price of electricity, which has skyrocketed as a result of the surge in gas prices. Price caps on specific technologies can bring financial resources to governments, which can then be used by governments by introducing measures to cap retail energy prices for consumers.

The note, according to Reuters, “presents the first set of measures to improve the functioning of European electricity markets and reduce the impact of gas prices on prices paid by consumers.”

The Iberian model, which caps the price of gas used to generate electricity, is also at the center of the discussion, according to people familiar with the talks. The difference with the import price is covered by a special fee levied on consumers. The cost of compensating for the difference between the limit and the price of imports is a concern for both the EU and many Member States. However, both models can be implemented immediately and produce results within a month, so they are considered with great enthusiasm by the commission.

P.S. As we mentioned earlier, energy market — This is a seller’s market, not a buyer’s market.: in a situation where there is only one with a bipod for seven with a spoon, it is the owner of the bipod who sets the conditions, and not vice versa. And if, in general, it is possible to live without a McDuck and iPhones (in practice, the same iPhones have not disappeared), then, as it turned out, the shortage of oil and gas has much more unpleasant consequences for economies. And this is not surprising, because of the Western countries, only the United States with Canada, Australia and Norway are energy self-sufficient. All the rest are entirely dependent on the goodwill and mood of the countries exporting natural resources, and not vice versa.

It is basically impossible to exclude Russia from the list of gas and oil suppliers. And given the situation, the Kremlin may “bite the bit” and completely stop oil and gas supplies to Europe, which, although it will hit the Russian economy, will plunge the EU economy into a much more catastrophic crisis.