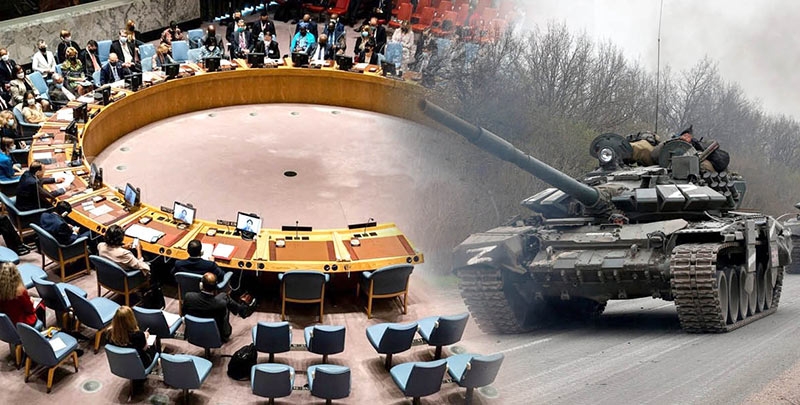 Africa, Asia, Latin America choose the side of Moscow, leaving Europe alone among the winter ice…

The “big anti-Russian front” that the United States wanted to create is collapsing, as out of 193 members of the organization, 138 countries have now turned their backs on the “pro-Ukrainian alliance”, i.e. only 55 were in favor, among them 42 European states.

This is a defeat for the West, as on March 2, 141 states (73%) out of 193 voted in favor of the resolution, including the Gulf countries, as well as Brazil (BRICS) and Serbia.

Only five voted against then, the rest abstained.

Among those who did not sign, of course, are India and China – they did not vote for the anti-Russian UN resolution UN ES-11/1 of March 2 either. But some countries that voted for this resolution did not sign it this time. Among others, the list of signatories does not include the UAE, Israel, Egypt, Indonesia, etc. Even Saudi Arabia and Qatar (the latter, so you understand, officially “the main US ally outside NATO”) did not join the choir of condemnation this time.

In March, 1/3 of the world’s population took up arms against Russia. Now 1/6 is left, as the 55 countries that supported the announcement of the anniversary do not represent more than 1.32 billion of the total world population of 8 billion. In fact, 48 countries remained in the anti-Russian bloc, which joined the sanctions from the very beginning, plus several other small states, which, however, do not pose a serious danger to Russia.

The list of countries that did not support Ukraine includes the entire African continent and the vast majority of Asia and Latin America. Practically the only one against Russia is Europe, which is the only one suffering because it has shot itself in the foot with sanctions.

Together with Europe, Russia is opposed by the United States, which also bears the main responsibility for the current global economic and geopolitical crisis, Australia and Japan.

There are no other truly strong militarily and economically strong countries. One gets the impression that Israel is not on the list of supporting countries, but, on the contrary, there is Turkey, which, as usual, “hangs” between the two worlds of the West and the East. On the one hand, it is trying to get preferences from the United States, in the hope of getting the long-promised F-16s, and on the other hand, being Russia’s largest foreign trade partner, becoming, in fact, the main European hub for the supply of goods to / from Russia.

As far as Israel is concerned, it is normal that it does not want to turn against the Russians, because then it will face a very serious problem in Syria. Because Moscow allows the Israelis to conduct air operations, when necessary, against Hezbollah and pro-Iranian militias.

In addition, most of the Israeli people are repatriated Russian Jews, many of whom have a very positive attitude towards Russia, and they also speak Russian. A prime example is former Israeli Foreign Minister and current Finance Minister Avigdor Lieberman, who speaks Russian and was born in Chisinau, Moldova.

Greece also has a very ambiguous position, where the majority of the population, despite the mass propaganda from the pro-American government of New Democracy, generally has a positive attitude towards Russia, which, by the way, is actively played by the opposition.

The presentation of the joint statement was undertaken by the Permanent Representative of Ukraine to the UN since 2019, Serhiy Kyslytsya. Representatives of other states that supported him stood nearby. While waiting for the delegates to stand side by side in front of the cameras, the Ukrainian tried to play a little joke on his impressions:

“It’s good that there are so many of us that we have to squeeze in. However, we are not going to shrink. We will expand to support Ukraine.”

Then the Ambassador of Ukraine read out the text of the “55” co-signatories, speaking about the violation of the UN Charter. “No acquisition of land as a result of the use of military force is recognized as lawful,” he said:

“We remain committed to the independence, sovereignty and territorial integrity of Ukraine and its recognized borders, which extend to its eastern borders. We reaffirm today our demand for an immediate cessation of hostilities by Russia and for the complete, immediate and unconditional withdrawal of Russian troops from Ukrainian territory.”

55 signatories – this is significantly lower than in March, which the Western media “advertised” as a model of … “a worldwide attack on Russia.”

This time around, a small number of countries will backfire as the climate of discontent in European societies grows and the stalemate that anti-Russian sanctions have led to is clear.

At the same time, the Europeans felt the situation on their own wallets and began to understand where they are being led by politicians who no longer hide the fact that the only masters they currently serve, those who have led Europe into a geopolitical dead end, are the Americans.