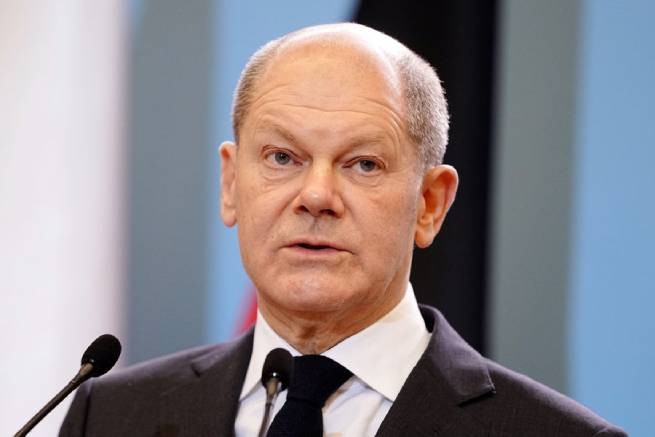 On Monday, Scholz published a guest column in the Frankfurter Allgemeine Zeitung, in which he plainly explained why Germany supports the US war in Ukraine against Russia, actively arming Ukraine, disrupting any peace agreements and overhauling the Bundeswehr.

All this has nothing to do with defending democracy or “Western values”, resisting an authoritarian aggressor, and other things that are usually listed as official excuses. In fact the war in Ukraine is aimed at helping Germany become the leading armed power in Europe, from a great power to a world power, writes Peter Schwarz in the publication wsws.org

When a representative of the German government says “Europe” and “EU”, he means Germany. In the article, Scholz points out that the politics of dissent from smaller states in the EU will no longer be tolerated. As we already see in the field of finance and economics, Brussels, Berlin and the powerful economic forces behind them will also dictate foreign policy. Europe’s “most important response to the changing eras” is “unity,” Scholz argues.

“We must categorically support it, and we must deepen it. For me it means an end to the selfish blocking of European decisions by individual states. An end to individual national actions that harm Europe as a whole. We simply can no longer allow the veto of individual states, for example, in foreign policy, if we want to be heard in a world of rival great powers.”

This article also exposes Zelenskiy’s lie that EU membership means democracy and national self-determination. In fact, the oligarchs, for whom Zelenskiy speaks, are promising themselves that in the EU they will be able to exploit their working class more effectively.
The workers of Greece, whose standard of living has been ruined by the “economy” demanded by the EU, could say a few words about this. So are the workers in Bulgaria, Romania and other Eastern European countries who, after 15 years of EU membership, still earn only a fraction of what their counterparts in Western Europe earn. As members of the EU, they can freely move to other EU countries and work, but even there they are exploited for pennies in construction sites, slaughterhouses and in the service sector.

Scholz unequivocally supports NATO’s goal of continuing the war in Ukraine until Russia is defeated, even if that means the risk of nuclear war. “We support Ukraine – and we will continue to support it as long as it needs our help: economic, humanitarian, financial and arms supplies,” he writes. At the start of the war, Scholz and his SPD party were accused of reluctant support for Ukraine and delaying arms deliveries. But since then the party has taken a clear position. Those who were against a complete break with Moscow were isolated. Former Chancellor Schroeder – Putin’s pal and longtime Gazprom employee – is now even in danger of being expelled from the party.

At a conference of the SPD-affiliated Friedrich Ebert Foundation on June 21, the new head of the party, Lars Klingbeil, had already called for “new strategic partnerships”. “We need new strategic alliances based on economic interests and political focus,” he said. “Germany should strive to become a leading power. After almost 80 years of restraint, Germany now has a new role in the international frame of reference.”

Waging a proxy war against Russia, the German government follows the tradition of the Nazi Wehrmacht. The military defeat of Russia, which NATO and the German government desire, will create the conditions for the fragmentation of a huge country and the plunder of its vast reserves of raw materials – a goal that Germany had already pursued in World War II when it attacked the USSR.

Scholz also wants to strengthen German dominance in Eastern Europe with the help of the war in Ukraine. As “a country at the center of Europe”, Germany “will connect East and West, North and South of Europe,” he writes. Ukraine, Moldova, Georgia and all countries of the Western Balkans should be admitted to the EU. “In the east of the alliance – in Lithuania, Slovakia, in the Baltic – Germany will “significantly increase its armed presence,” – he adds.

And in this Scholz draws on the criminal tradition of Germany. Control of “Mitteleuropa”, as it was then called, was a central goal in the First and Second World Wars. The infamous “September Program” of Theobald von Bethmann Hollweg, then Imperial Chancellor, drawn up shortly after the outbreak of the First World War, argued that only Germany, strengthened by Mitteleuropa, could become an equal world power along with Britain, the United States and Russia.

Strikingly, Scholz never mentions the US in his article. This is not an oversight. Now the United States is necessary for Germany, as the strongest military power in the world and the head of NATO, but in the long run, the US is seen as a strategic rival.

The German media are following the internal and external decline of the US with a mixture of concern and gloating. Here is a typical Süddeutsche Zeitung commentary on Biden’s visit to Saudi Arabia.

Biden “arrived with a totally unrealistic list of demands only to depart 24 hours later with many big words but few concrete accomplishments.” he received a “lesson of power loss”writes Stefan Cornelius, head of the newspaper’s political section. “This visit demonstrates the decline of American power; it shows the action of centrifugal forces in what has become a multi-polar world.”