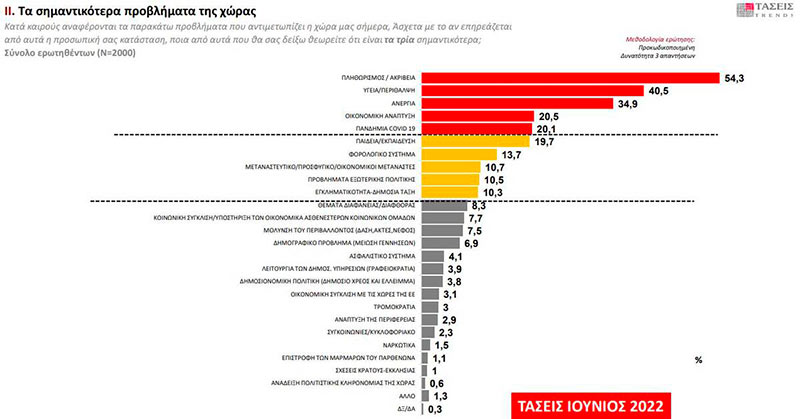 The opinion poll showed that the difference between the ruling conservative New Democracy and the main opposition coalition SYRIZA P.A. is declining and is 7.2% from 8.2% about three weeks earlier.

In third place with a double-digit percentage is the socialist PASOK-KINAL (12.2%), in fourth place the communist KKE (4.7%), in fifth place the nationalist Helleniki Lisi (Greek solution – 4.5%) and in sixth place Varoufakis with the party Mera25 (3.1%).

The percentage gained by non-parliamentary parties is quite high, with two far-right parties receiving more than 1% each. The percentage of undecided Greeks is 14%, which is significantly lower than in previous polls (18%).

An important indicator is the fact that 25.1% respondents think: no party not suitable for serious issues.

Cost of living is the biggest issue

The survey captures what are the biggest challenges citizens face today and to what extent they are optimistic or pessimistic about the future. However, the messages are not favorable.

Regarding the most important problems of the country, citizens put first price increases (54.3%), health (40.5%), unemployment (34.9%), development (20.5%) and the pandemic (20.1%). In the assessment of citizens, education, taxation, immigration, foreign policy issues and crime follow as problems.

It should be noted that at the moment the poll does not reflect the forecast of the election results, since Greece is not in the official pre-election period, and political parties have not yet announced election programs and debates.

Although Prime Minister Kyriakos Mitsotakis reiterates at least twice a week that the parliamentary elections will be held on time, at the end of the fourth year from July 2019, probably in the spring of 2023, the atmosphere is highly volatile and elections could be held early autumn 2022.

Many citizens see increased energy subsidies and promises of higher pensions and some tax cuts as a prelude to early elections.