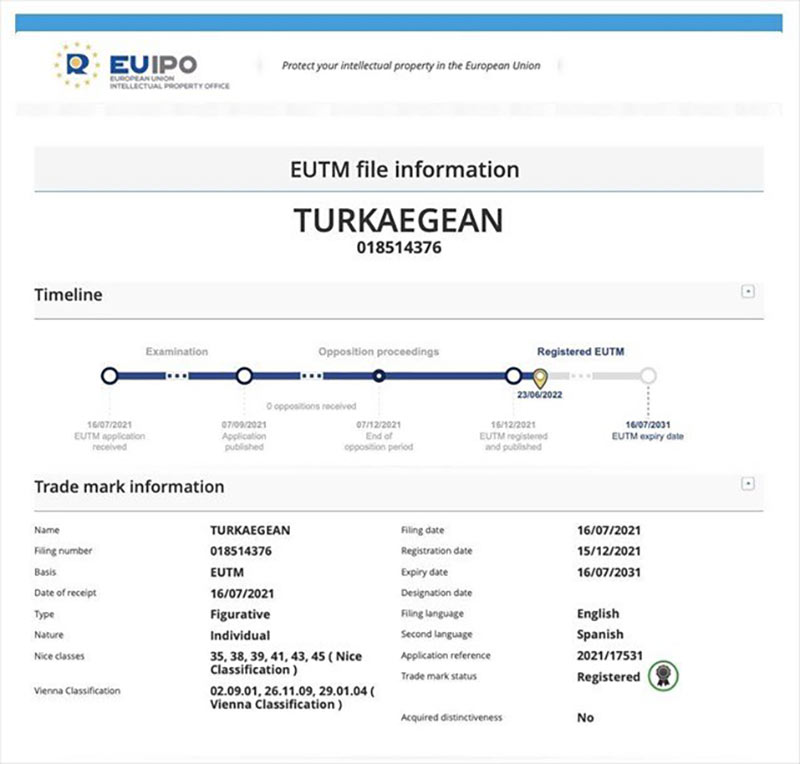 The European Union Trademark Agency has accepted Turkey’s request to register the term “Turkaegean” – Turkish Aegean – as a trademark.

Solution EU unacceptable to Greece and raises questions about what the Greek authorities did or did not do to prevent such a move.

The EU Intellectual Property Commission (EUIPO) granted the trademark to the Turkish Tourism Promotion and Development Agency in December 2021 and thus until July 2031.

The EUIPO, without any objection, accepted Turkey’s request for an indirect appropriation of the Aegean (i) through an advertising campaign by patenting “TurkAegean” for tourism purposes.

A document posted to EUTM, the European Trademark Office, states that the term has been adopted as of 15 December 2021 with an expiration date of 16 July 2031. In Greece, the registration was noticed when the Greek daily newspaper nafttemporiki reported on the problem on June 24, 2022.

“Turkaegean” – what is hidden in the term?

According to the Turkish Tourism Agency, “Turkaegean” is a “shore of happiness.” The commercials say: “Join the Turkish Experience on the Shore of Happiness! The Aegean region of Turkey offers you beautiful landscapes, dazzling coastlines, immaculate beaches, pine forests and olive groves.” However, in fact, this is an abbreviation of Turkish Aegean, which means “Turkish Aegean Sea.”

The US Patent Office rejected the application

Earlier in June, it became known that the US Patent and Trademark Office temporarily rejected the same Turkish agency’s application for trademark registration in the US. The reasons for the provisional rejection are simply errors in the application form, such as vague wording in the application identifying services offered under “Turkaegean”, a trademark description was not included in the original application, and neither was the applicant’s email address. The Turkish Tourism Promotion and Development Agency has been given six months to reapply through a US-licensed attorney.

Meanwhile, a search on the website of the World Intellectual Property Organization reveals that the “Turkaegean” trademark is described as already “active” in five jurisdictions (Australia, Brunei, Japan, WIPO and the EU) and is “pending” in another 15 countries. (Mongolia, Cambodia, Canada, Cuba, Iceland, Indonesia, Israel, Laos, Malaysia, New Zealand, Philippines, Samoa, Singapore, Thailand and USA).

This trademark is not just a name, it is a claim to dominance in the region, according to Greece.

This issue is fraught with serious risks, since nothing rules out – Turkey will use this decision to continue its challenges, questioning the Greek ownership of the Aegean.

Of course, the question arises: have the Greek authorities realized the Turkish challenge and have they reacted for so many months? naftemporiki which reported the registration of a trademark.

It should be noted that Turkey began promoting the “Turkaegean” campaign back in July 2021. In November of the same year, Ankara’s tourism authorities stated that “The Aegean is also a territory belonging to Turkey”. reportedwhat they justified the name “Turkish Aegean” by saying that it arose from the fact that Greece considers the Aegean only as its own territory. The goal of the campaign is to make the Aegean not only Greek, but also Turkish.”

Leading professor of linguistics of the country Giorgos Babiniotis called the fact that Turkey calls the Aegean Sea “Turkaegean” and the Mediterranean Sea “Blue Sea”, in connection with the Turkish “Blue Homeland” expansion plan. He specifically noted the Greek origin of the term “Aegea”, which the Turks had been using to refer to the Aegean since they arrived in the area, and recalled that in the 16th and 17th centuries the Turks used the term “sea of ​​the Greeks”.

He warned of the dangers of “Turkic” in the context of Erdogan’s revisionist plans. In Turkey, they had previously tried to replace the word “Egea” with a more Turkish one, but decided that this was inconvenient and would be worse perceived by tourists.

Anyway, yesterday, Sunday, the Greeks launched the hashtag on Twitter “Aegean archipelago” which posted photos and comments proving the Greek origin of the Aegean, as well as the words “Aegean” in any language.

Don’t buy knock off, goods and services.
There’s Only One #Aegean_Archipelago pic.twitter.com/5Je3OEJUpp