“No one can give a logical answer as to why my name was removed from the Novartis FBI document translation,” PASOK MP told Skai TV on Friday morning.KINALformer Health Minister Andreas Loverdos.

This is another statement by Loverdos after the newspaper documentonews and website koutipandoras released on Thursday afternoon the original FBI document and the official Greek translation.

In an FBI document dated May 25, 2017, the Greek authorities in were informed in writing about how and to whom Novartis paid kickbacks to officials who purchase medicines for government agencies. In Athens, the investigator in charge of the case, sent the original document to the Ministry of Foreign Affairs for official translation. In the translated document attached to the case file, the name of the ex-minister has been removed.

Loverdos’s name, along with several other former and current officials, was simply missing from the Greek translation by the Foreign Office’s translation service at the time they were bolded in the original FBI document, according to the publication. efsin.

“Of course, the name is in the original document. This is a very famous document of 2017. It was supposed to go to parliament in 2020, when a preliminary investigation was carried out, ”said Loverdoswho served as Minister of Health from 2010-2012 in the first two years of financial assistance agreements.

On Thursday night, Loverdos’ first reaction was to statementin which he accused SYRIZA’s main opposition of throwing “dirt” at him and called them “professional detractors of politics”. 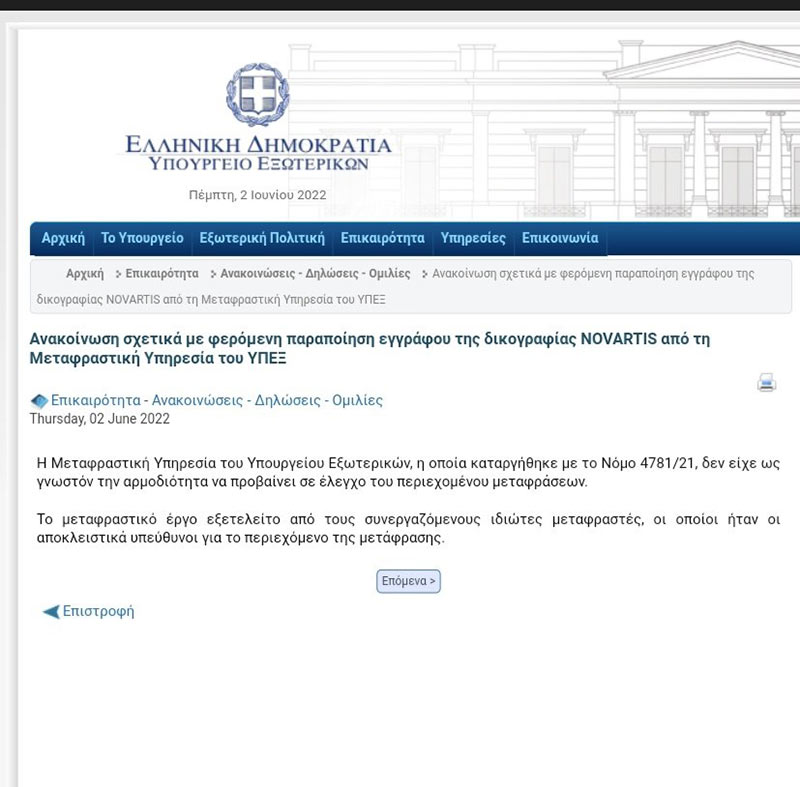 Also late in the evening of the same day MFA issued a statement that it “takes no responsibility for the incident,” stating that the FBI’s translation of the document was done by a private translator, and the ministry is under no obligation to verify the result.

The Ministry also stated that “the state translation service was abolished in the summer of 2021,” however, the date of April 2021 is indicated on the translation of the document, when this service was performed by the Ministry of Foreign Affairs structures for such documents.

When social media news took on scandalous proportions, interpreter told the media that all four names were in the translated text she delivered to the Foreign Office, hinting that the text had been altered by someone else. “There are other names,” she told the daily avgi.gr.

Friday afternoon owner documentonews Kostas Vahewanis filed a lawsuit against the translator, apparently in an attempt to get an official investigation into the matter, as all involved claimed “ignorance” about the disappearance of the names. “Let justice find out who removed the names,” said Vaksevanis.

reportedthat both the media coverage and the Vahevanis lawsuit have mobilized the prosecutor of the trial court in Athens, who will have to dig deeper to find out who falsified the FBI document in its Greek version.

Former Chief Anti-Corruption Prosecutor Eleni Tulupakiwhich investigated the Novartis scandal when it erupted in December 2016 and was later prosecuted by Greek authorities, testified to a prosecutor on Friday morning about a garbled Greek translation of the document, reports koutipandoras.gr.

PS. Novartis kickback scandal in Greece is a never ending story until someone takes the investigation seriously without succumbing to political pressure.