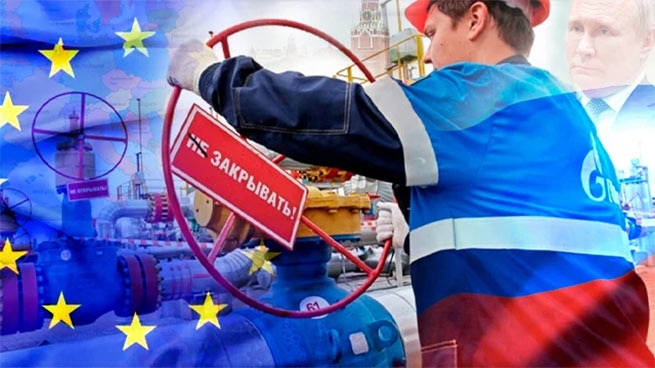 The footage, contained in the less than two-minute video, shows workers “Gazprom” at gas production facilities, a thermometer, the stobic of which drops to … zero, a flag EU and winter creeping across Russia and Europe.

At the beginning of the video, an employee of the Russian Gazprom shuts off the gas valve. After that, an ice age begins in Europe, which covers different cities. At the end of the video, a frosty spire rises above the white desert, and the off-screen voice sings the words from the song of the same name by Yuri Vizbor: “Only twilight and snow.” Thus, the authors hint that Europe will not be able to heat its population with the help of alternative energy.

The soundtrack is the song by bard Yuri Vizbor “And the winter will be big” (performed by his granddaughter Varvara Vizbor), which sings about crying Russia.

The video, which has been widely circulated on Telegram and Twitter in recent hours, has not been published on any of Gazprom’s official social networks. However, many users cite a Russian company as a source.

Recall that on September 2, Gazprom announced shutdown of the Nord Stream pipeline. The Russian monopolist claims that experts have identified malfunctions and damage to the equipment.

European Commission Speaker Eric Mamer believes that the company has come up with a false pretext to shut down the pipeline. According to him, Russia’s actions are yet another confirmation that Gazprom is an unreliable gas supplier. At the same time, Russia, it seems, has already ceased to refute this statement, referring to the fact that it will supply gas and oil only to friendly countries.