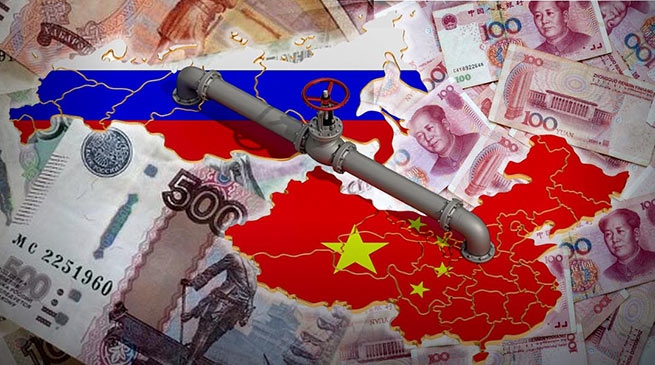 Making up 20% of the world economy, Russia and China have announced that they will forego the dollar in their transactions with each other and will pay for gas supplies in rubles and yuan.

This is literally a “nuclear” strike on the US monetary system, as the movement of hundreds of billions of dollars a year will stop, and the Russian ruble and Chinese yuan, respectively, will strengthen.

In particular, the Russian oil company Gazprom announced today (6/9) that it has signed an agreement to start paying for Russian gas supplies to China in yuan and rubles instead of dollars. Gazprom CEO Alexei Miller said the new agreement, which provides for payments in Russian rubles and Chinese yuan, is “mutually beneficial” for both Gazprom and China National Petroleum Corporation (CNPC), and could serve as an example for other companies.

The deal is part of the Kremlin’s effort to get rid of currencies it considers “unfriendly.”

What does the supplementary agreement provide?

The Russian energy giant announced the signing of an additional agreement to the existing one with China National Petroleum Corp. Payment will be made at 50% in rubles and 50% in yuan, starting from the moment the document comes into force, a source told Bloomberg on condition of anonymity.

Earlier this year, Vladimir Putin called on key Gazprom customers in Europe to pay for gas in rubles. The move was taken in response to the “freezing” by the US and its allies of more than $300 billion in Russia’s central bank reserves.

Russia is also switching to gas payments in rubles with Turkey, which maintains close ties to the Kremlin and has not imposed sanctions. But initially, only a quarter of the total amount will be paid in Russian currency, and the rest in dollars and euros, the source said. The share in rubles will increase over time, he added.

In February, when Vladimir Putin visited Beijing, Gazprom signed a second agreement to supply an additional 10 billion cubic meters a year for 25 years through the new pipeline, although deliveries have yet to begin.

India will pay for energy with Russia in rubles and rupees

As we reported earlier, one of the world’s largest economies India plans switch to settlements with Russia from dollars to rupees and rubles.

What can be opposed to such a partnership

From an economic standpoint, China’s output is more than convincing, and India’s size and population are too large to ignore. In addition, Russia’s plan to move away from the dollar and the euro will lead to a significant de-dollarization of the planet and has a chance to end the US ability to impose sanctions on anyone who is concerned about their threat, that is, to destroy their planetary hegemony, which no longer seems to exist.