The success of the premiere of the film “Cheburashka” proved that Russian cinema is alive and, most likely, will develop successfully in the coming years. This means that there will be something to show at the upcoming international film festivals in Russia in 2023.

Does not lose faith in Russian cinema and Anna Pendrakovskaya, film producer, former director of the Moskino company, who has vast experience in organizing international film festivals. Among other things, Anna Vasilievna has been holding the Russian-Greek festival “Kino Friends” in Athens for more than 10 years. True, first the COVID-19 pandemic, and then the crisis between Russia and Ukraine, suspended its activities. But, despite this, Anna Vasilievna is sure that the attraction of the two peoples to each other is indestructible. And film festivals are just part of the cultural exchange that cannot be stopped.

– Participation in international festivals is very important for the film industry. During the communication at the festivals, there is a convergence of cultures, and we help this process as much as possible. I showed our films in the cinemas of Athens, with which I had targeted agreements. All films came with Greek subtitles, so the audience of films has always remained large. For example, the film “Legend No. 17”, “Sergius of Radonezh” by Sergei Khotinenko was a huge success, a retrospective of films and a master class by Alexander Sokurov were a huge success.

Both parents and children always watch the Yeralash newsreel with delight. After all, the situations of children’s life are repeated regardless of the country and nationality: the child goes through the same stages of growing up, mastering the world of adults. Now directors are afraid to show Russian films because of the aggression of Ukrainian refugees and pro-Ukrainian activists in the country. But the request and need for our kind, bright cinema, our cartoons is great. Greeks love Soviet cinema. They have very open emotions, much more open than those of the Russian audience. And not because they are less sophisticated. They are just more sensitive.

A monument to the Kazakh apple, the symbol of Almaty, was erected in the Athens district of Aharne (Menidi)

– People moved to Greece from different territories of the former Soviet Union, Russia. These are Pontic Greeks, and Siberian, and Kazakh. In November 2022, in one of the Athenian districts of compact residence of repatriates from Kazakhstan, apple monument – the symbol of Alma-Ata. The city that sheltered several tens of thousands of Pontic Greeks after 1944. I don’t think that our Greek diaspora treats its Soviet or Russian past in the same way. Were your main viewers our Russian-speaking compatriots or Greeks?

– People came to Greece for various reasons: both as repatriates of Greek origin, and for a better life. And if a person has settled in a new place, adapted, he wants to consider himself a Greek. Many even try to merge as much as possible with Greek culture without teaching their children the Russian language. Everything is very different. But still, the majority is nostalgic, drawn to culture, language. Until recently, the First Channel of Russian Television worked in Greece. And people still wanted to see the “stars” from the TV next to them. And through this contact, our festivals and meetings with actors kept the threads of cultural ties with the historical homeland.

– But after all, our cultural, human ties cannot be interrupted, despite all the efforts of politicians. Russians live in Greece, ethnic Greeks live in Russia. Even in Siberia, in cities along the former Trans-Siberian Railway, National-cultural autonomies of Russian Greeks have been created and are actively working. These are the descendants of the settlers of the 1910s who fled to work after the Turkish massacre in the Transcaucasus. Sooner or later, all joint international events will continue to exist. And your festival too.

– Now it is impossible to hold the Russian-Greek festival in the previous format. I, as the organizer of the festivals, cannot take responsibility for the safety of the participants, their comfort due to the aggression of Ukrainian refugees and pro-Ukrainian local activists. But in Russia, the Greek Cultural Center at the embassy is actively working. After all, the Greek diaspora lives not only in Moscow and Crimea. We even have about 70 Greeks living in Krasnoyarsk, they are active in social activities. Private connections and communication continue. For example, I invited the director of the Greek Cultural Center in Russia, an employee of the embassy for economic cooperation, historian Theodora Yannica, to the documentary film festival “We won together” in Volgograd.

It should be noted that the Greek Cultural Center in Moscow is very active. For example, he conducts an extremely interesting series of lectures “Greece and Cyprus through the eyes of Russian travelers in the early 12th – first half of the 18th centuries” within the framework of the lecture hall of the GKC.

In addition, he participates in scientific conferences on philology, history, cultural studies together with Moscow State University. M. V. Lomonosov. Public associations of Greeks in Russia do not lag behind either. The Moscow Society of Greeks (MOG) helps not only its members – residents of the capital, but also the Greeks in the liberated territories. Back in early June, the MTF sent the first batch of humanitarian cargo for children to Mariupol and nearby villages. And under the auspices of the Federal National Cultural Autonomy of the Greeks in 2016 – the cross year of Russia-Greece – the First International Film Festival “Modern Greek Cinema” was held with great success. In the autumn of 2021, the second festival took place in Moscow.

In turn, there are about 70 public organizations and associations of Russian-speaking citizens in Greece. There are many Russian schools in which the children of our compatriots study. Russia and Greece are Orthodox countries, which binds our cultures and peoples even more tightly. And while the Russian-Greek festival “Film of Friends” is on pause, in Greece itself, film industry figures organize festivals showing little-known Soviet avant-garde cinema. 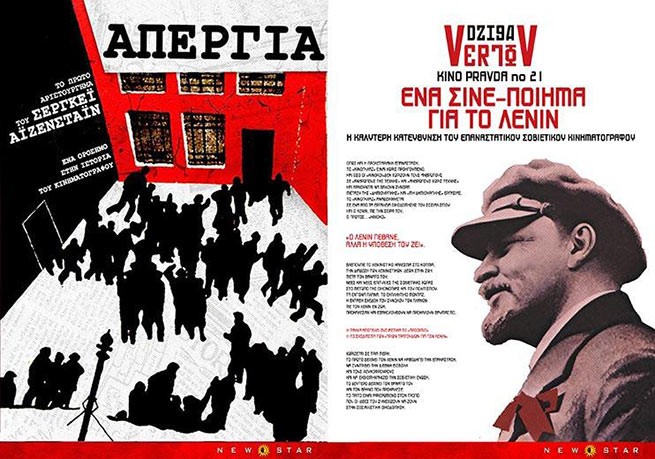 So, held on January 5-11 in Athens Film Festival “Cinema of Soviet Editing” consisted of 31 films by Soviet avant-garde directors of the 20s – members of the Soviet Montage community, who promoted the ideas of communism, the creation of a just society in a new, then unusual language of cinematography. 11 tapes were shown in the country for the first time.

Festival organizer Velissarios Kossivakis, director of New Star, is also well acquainted with modern Russian cinema. In 2016, together with the Union of Cinematographers of Russia, he organized the screening of 15 Russian military-historical films: from the classic The Cranes Are Flying and Ordinary Fascism to the modern Star and Road to Berlin. Our long-standing cultural ties show that in Greece they remember and love Russia in all its creative manifestations and in all eras.