Europeans still prefer to pay in cash when shopping, but contactless card payments are gaining momentum.

In Greece, in particular, the share of cash payments in physical stores recorded an 18 percentage point decline this year compared to 2019, to 62% in terms of transactions. Based on the value of transactions, the decrease will be 12 percentage points from 2019, while the corresponding figure will be 48%. Card payments account for 33% by number of transactions and 43% by value. In fact, in our country, it seems that the majority of the population (more than 1 in 10) still receives income in cash, and not through a bank deposit.

Those are the findings of a new European Central Bank report on payments in the euro area, which even details exactly how people in every country, including Greece, choose to pay. These data are presented today by Economikos Tachydromos. 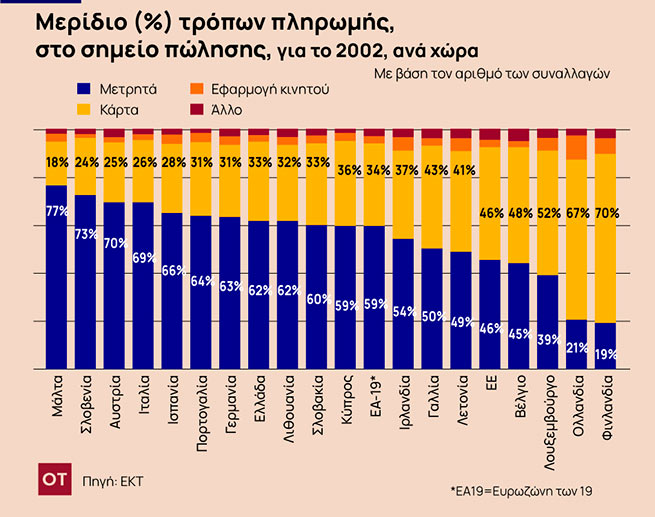 Europeans still prefer to pay in cash when shopping, but contactless card payments are gaining momentum.

As the ECB notes in its report, compared to 2019, the use of cash in the euro area has decreased. This is observed in most eurozone countries, although in Slovenia and Estonia the share of cash payments remains almost unchanged. “The use of cash has declined the most in the countries of Southern Europe: in Greece, Spain, Cyprus and Portugal,” the report says.

However, in Greece, more than 70% consider it very or quite important to be able to easily make cash payments, the same data show. It should be noted that in this rating our country is very high, almost on the same level with Germany, Austria and Cyprus, where cash transactions are also very common. 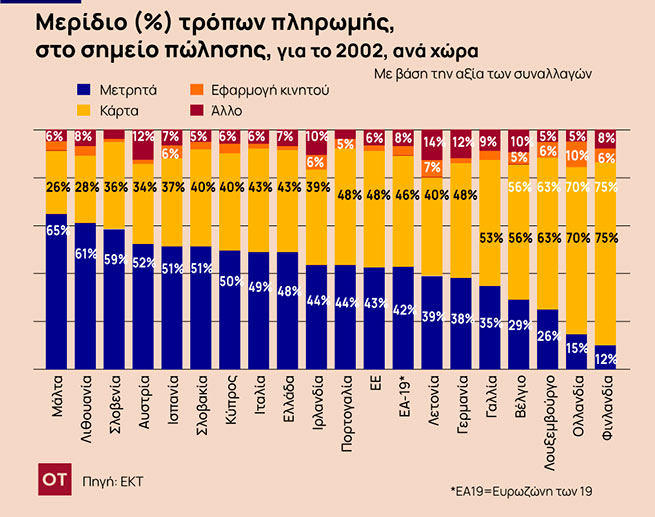 Contactless payments at the point of sale increased in the euro area from 41% of all card payments in 2019 to 62% in 2022. Changing habits varies significantly across the Eurozone. Lithuania was the only country where the share of contactless payments in total card transactions decreased from 54% to 53%. 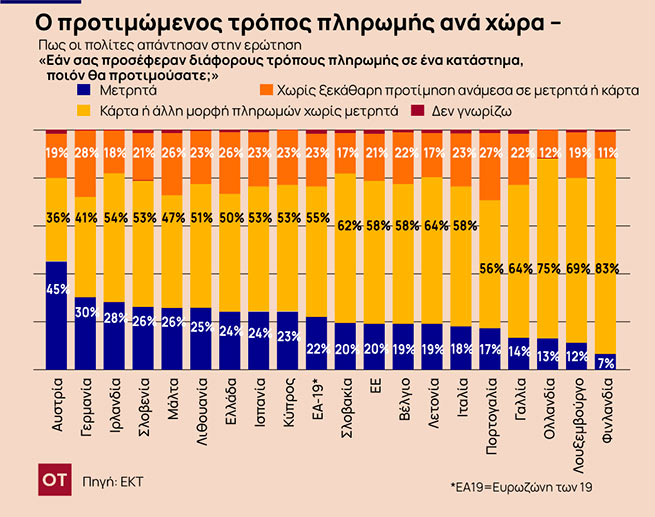 Which countries still prefer cash, and which cards
In a number of countries, the majority of payments at points of sale (shops, etc.) in 2022 were still made in cash. The highest shares in terms of the number of such payments were observed in Malta (77%), Slovenia (73%), Austria (70%) and Italy (69%), and in terms of the value of payments – in Malta (65%), Lithuania (61 %) and Slovenia (59%). Card payment was the most frequently used method for shopping in stores and services in 2022 in four eurozone countries: Finland (70%), the Netherlands (67%), Luxembourg (52%) and Belgium (48%). In Estonia, the share of card payments was almost the same as cash payments (both 46%). 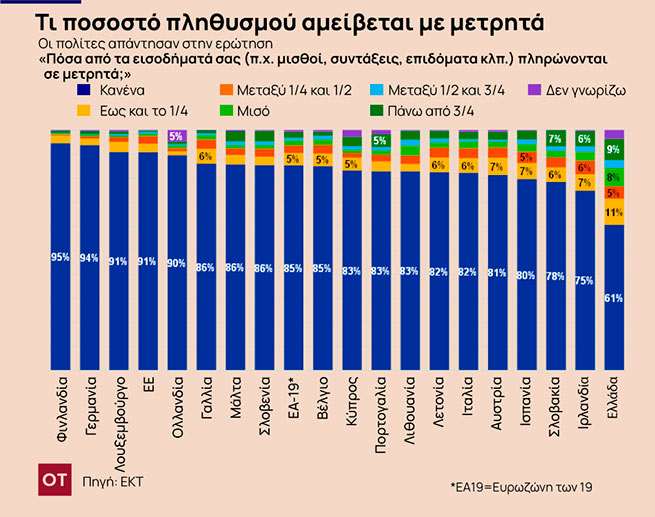 How the collection of cash income affects operations
Cash received as part of income could affect the use of cash in transactions, the ECB notes. The results show that the majority of eurozone citizens (85%) did not receive regular cash income in 2022. This figure was slightly higher in 2019, when it stood at 87%.

Greece is a special case, as “11% of people received up to a quarter of their income in cash (about double the eurozone average of 5%). 8% received half of their income in cash, and 9% more than three-quarters,” notes ECB. “This indicates a stronger dependence on cash in Greece than in other Member States EUat least in terms of willingness to accept cash compared to other options such as direct deposit,” the report says.