This year we pay 70% more for basic food and direct household items compared to the beginning of February 2022, and, apparently, the price increase does not even think to stop there.

In general, for a basic basket of goods, for which last year we paid 76 euros, this year for the same, almost, goods, all branded goods for comparison, we pay almost 94 euros, a 23% increase. Prices have risen for everything from milk, eggs and bread to office supplies and cleaning products, with double-digit price increases.

Taking into account the data of the Family Budget Study for 2021 and the fact that food inflation was 15.5% in December 2022, it follows that on average, households are asked to spend about 360 euros on this category of goods alone, compared to 311 euros a year ago.

The problem is, of course, much more serious for economically vulnerable households, because although food costs average 22% of household expenditures, this figure is much higher in the poorer households, and for the poorest 20% of the population it rises to 34.8%.

**Price for chicken eggs without subsidies.

Worst of all, the rise in food prices will not end there: market representatives predict that prices will continue to rise at least until the end of the first half of 2023.

Products made from high-value raw materials not yet in retail, continued uncertainty as the war in Ukraine drags on, and persistently high gas and electricity prices despite temporary de-escalation and subsidies for businesses are the main reasons for the bleak outlook food prices.

“The raw materials used for cooking are purchased at very high prices. Therefore, the prices of finished products will continue to rise. Even if growth stops, there will be stability at very high prices. Changes will occur only after the summer harvests,” says Spyros Theodoropoulos, owner a number of food industry companies (Nikas, Edesma, Ambrosias, Chipita Foods, Hellenic Juices and a shareholder in ION and MEVGAL).

“Despite the rise in prices for energy and raw materials in 2022, companies tried not to take hasty steps, move within their budgets and not shift all increased costs onto the prices of finished products. Even in cases where raw materials are a very high cost factor, companies did not convey 100% price increases and we have seen this typically in bread, eggs and poultry,” says Stefanos Komninos, co-founder of consulting firm Netrino, market analyst and former general secretary of trade, in an interview with K. “The fact that there is no significant retreat in energy and raw materials, and at the same time, the degree of uncertainty, especially regarding geopolitical developments, has not decreased, leads to the fact that enterprises are now transferring increased costs to prices that they kept in check to a certain extent in the previous period,” he adds.

Komnenos says the price increases are nominal so that suppliers and supermarket chains can be flexible with their offerings. “Whether all of them will be transferred to the consumer price will depend on whether there will be a significant decrease in sales, consumption in the next period,” he says. And he doesn’t rule out the possibility of higher prices for private label products in the new year, as contracts awarded by supermarkets to businesses that “fixed” prices in 2022 are largely being renegotiated. This development, in turn, will contribute to a further increase in prices for branded products.

Subsidized goods are swept off the shelves in the morning

Another problem that has appeared recently is the lack of goods from the so-called. list “home basket”. We are talking about goods for which the state has set a price limit in the corresponding list. Working residents complain that during the evening hours when they return from work, many popular items are missing from the “home basket” list, forcing them to purchase more expensive goods or leave the store without purchases. 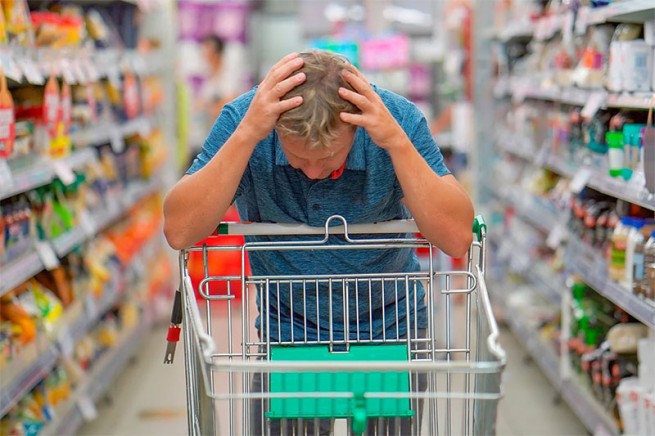 Another problem that has become noticeable lately is the reduction of goods in packages. If earlier this phenomenon was not very noticeable, now most manufacturers have begun to reduce the weight of the product in the package with a slight increase in price. As a result, the buyer thinks that the price has increased by 10% or a little more, but in fact there is an increase of 30-40%.

Taking into account course “not to increase prices”, formed at the government level, many firms have no other choice. The alternative is to reduce the amount of goods in the package (for example, sugar. Instead of 1 kg – now 900 gr. But the packages look the same. And those citizens who are not so picky and do not look at the labels probably still think that they buy 1 kg, but for some reason the product ends faster…).

Consumer protection associations warn that it is estimated that in the near future this practice will be “taken up” by a large number of companies, and the number of labels that reduce their content (often increasing the price) will exceed 50. Inevitably, the “gimmick” is characterized as a speculative practice.

The government announces a fall in inflation to 7.2%

Last thing statement ΕΛΣΤΑΤ about the fall in inflation to 7.2%, of course, pleases, but manufacturers and suppliers of goods say that in the near future we are waiting for another rise in prices. This means that either the authorities communicate deliberately false information, or the population simply does not understand their happiness and constantly grumbles about something … Where could the Mitsotakis government find another people? Do not tell me?