A veteran photojournalist for the Associated Press talks about the junta inauguration photoshoot and reminisces about the late King Constantine and the Black Colonels.

This photo was taken on April 26, 1967. Aristotelis Sarrikostas, the iconic photojournalist for the Greek Associated Press, had already received a call from King Constantine’s press chief the day before. He was told that he was to cover the swearing-in of the “national government” involved in the 21 April coup.

Arriving at the side entrance of the Tatoi Palace, he was stopped at the door by two armed soldiers. “Where are you going?” they ask him. “I’m an Associated Press photographer and I’ve been given permission to photograph the king,” he replies. “What king? Now we are in charge here,” the captain objects to him.

With confirmation from within and at his urging, the photographer is allowed to enter the palace for the famous photo with “gloomy and gloomy Constantine”, as the late former king liked to say, trying to show his displeasure with the oath of this government under the Greek crown. “This is not my government,” Konstantin said when the Americans pressed him on a trip to the US in 1967 to talk about the dictatorial government installed in Greece.

“On the famous staircase of the palace, the military and politicians of the dictatorship had already begun to gather,” recalled Aristotle Sarricostas. “Immediately after that, Konstantin arrived. He really looked sullen, and I was struck by his serious face,” says the legendary photojournalist. When the photo shoot was over, they waved “we’re done” and everyone quietly left.

“I didn’t know any of the people of the dictatorship,” he continues the story. “But since I had to send a photo to the Associated Press – there was nothing I could do about it – I went to the press office that the junta had set up on Zalocost Street, where before dictatorship was the Ministry of the Press. I show them a photo and ask them to tell me who is who. And what did they do? They filled the photo with numbers written in marker, and under them they wrote the name of each person. I sent two photos to the Associated Press – one “blurred” and one clean. As Aristotle Sarrikostas recalls, he was responsible for each photograph: “I took them, developed them, edited them, wrote the captions, sent them – all by myself.”

Following the Greek royal family
The photojournalist has always had a good professional relationship with the palace for 40 years, as for the royal family, foreign agencies were a means of international relations. Aristotelis Sarrikostas accompanied the Greek kings on as many tours of the country as possible. “Somewhere between 1965-66, Constantine travels around Northern Greece and inspects the troops. At the same time, military exercises were taking place. When it came time to go to bed, they informed the king, who was in a tent during the tour, that he would sleep here – on camp bed. There is no need to talk about his delight that he slept in a tent, “recalls Aristotle Sarrikos. 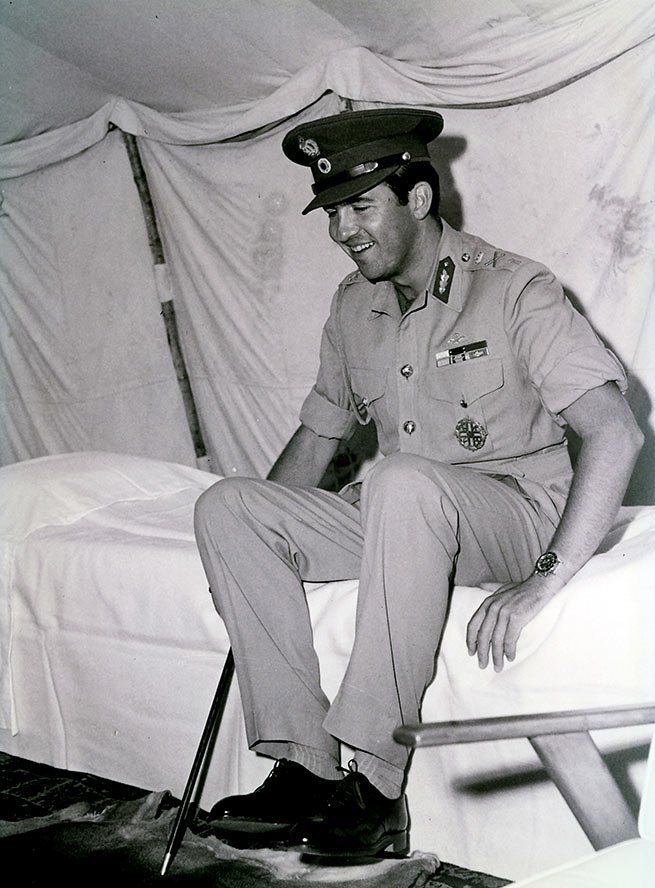 Konstantin is happy in the military tent. (©Aristotelis Sarrikostas/EPT Archives)

“During another tour, in Rhodes, around 1966, Konstantin, among other things, had to give a speech in the central square. The problem was that not a single person gathered, and this, from a photographic point of view, was a shame for king. At the suggestion of his men, he should not have shown that he was alone. Yet a colleague took a photograph that was widely circulated in the Greek press. All photojournalists who accompanied the king on tour were subjected to a “sacred examination” by Constantine’s associates in order to testify to the photographer . None of us talked,” the photographer recalls. 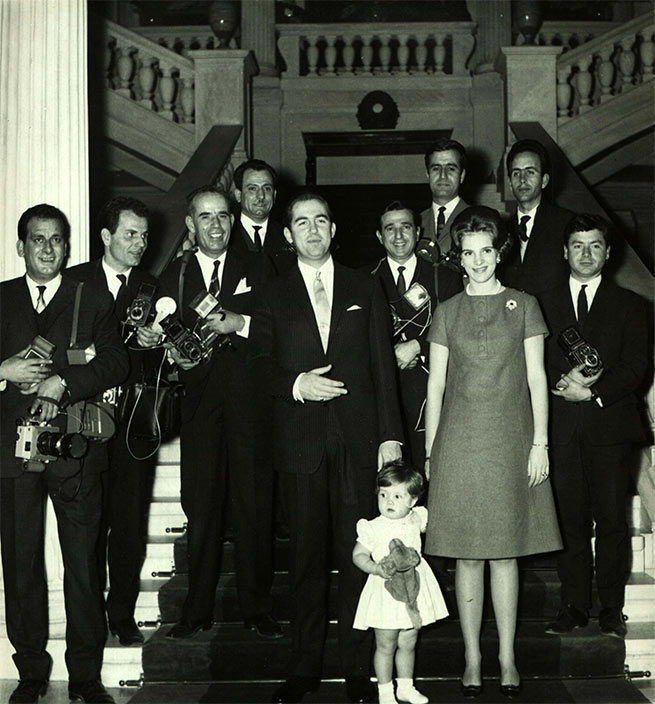 King Constantine and his wife Anna Maria with little Alexia. To the right behind the then queen, Aristotle Sarricos. Commemorative photograph taken by a photojournalist in Tatoi. (©Aristotelis Sarrikostas/EPT Archives)

When Greek and foreign correspondents organized a football match by borrowing uniforms and shoes from the local team, “Konstantin suddenly appears and says:” I will also play, half the match with some, the other half with others, “and sends someone to find him a pair shoes and suitable clothing. “Actually we did our best to let him score. Of course, most of the time, instead of looking at the ball, we kept cameras handy to capture the moments,” says Aristotelis Sarrikostas, who caught Konstantin walking around the Aeolus. “He was a man who, I suspect, was influenced by the liberal the spirit of the Danish Anna-Maria,” he adds. 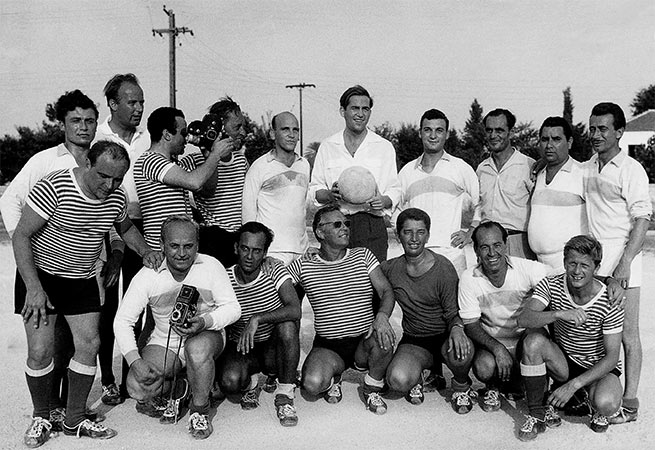 King Constantine with Corfu correspondents stands in the center with the ball. (©Aristotelis Sarrikostas/EPT Archives)

“He was terribly kind to us. When we were waiting for the shoot, he would come by himself or send someone and ask if we wanted sandwiches, water or juice. In fact, none of the royals usually instructed us, how and what to photograph. Frederica, however, every picture in which she was depicted, asked through her mother, Mrs. Wurloomy, that I send her. “

Appeal from the dictatorship
With the junta, Aristotelis Sarrikostas (according to him) did not have very good relations because of the Associated Press, since the “black colonels” did not like the American agency, despite the fact that they had relatively good relations with the United States.

He also recalls his first, special meeting with Georgios Papadopoulos, shortly after the junta government was sworn in, at the Press Ministry. “No one entered Papadopoulos’ office, except for my colleague Leonidas Floros. At that time, the director of the press service of the dictator was the Vradini journalist Elias Malatos. In the first days of the coup, an American admiral was supposed to visit the country, who asked to meet with Papadopoulos – not with the prime minister “Minister, nor the Chief of the General Staff. But they wanted to send photos of the meeting abroad, and Leonidas Floros did not have the opportunity to do this, so he suggested to Malatos that I help them. While we were waiting for them in the hallway, Papadopoulos appeared, and I for the first time I saw him not in uniform – after all, the portrait of Konstantin and Anna-Maria still hung on the wall. He was kind to me and, perhaps, cheerful. When the admiral appears, I give them instructions and tell them how to arrange everything. When we finished, I’m about to leave, but Malatos stops me. “When you show them, come and I’ll choose the best,” he tells me. I react, take out a film, hand it to him and say: renunciation”. “Did I offend you?” he asked me. “Well, a little,” I reply. He returns them to me and tells me to send whatever I want to the Associated Press. And from then on, besides Floros, I was the only one who could get into Papadopoulos’ office.” 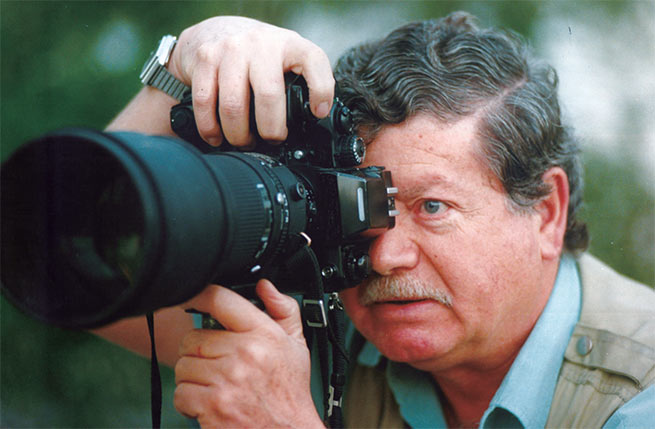 On one occasion, however, he was threatened with a “ride” by Bouboulinas for sending photographs to the agency without being reviewed by the censored uniforms appointed by Georgios Papadopoulos – earlier, of course, he was treated to coffee. As you know, everything that was to be published – both inside the country and abroad – had to get the approval of the censor. Twice, however, he was arrested, but immediately released. 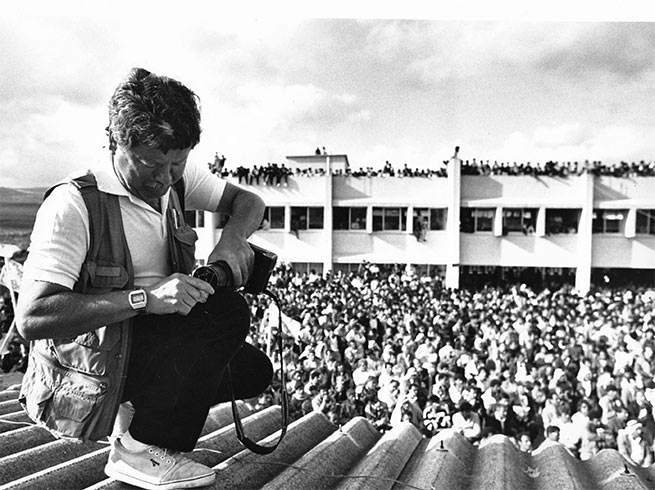 “These were 40 wonderful years – I’m saying I didn’t retire, I took a vacation,” says Aristotelis Sarrikostas, who has given us some of Greece’s most iconic photographs over decades of service – who can forget the legendary photo of a tank at the entrance to Polytechnic Institute – but also military operations in the Middle East, especially in Lebanon. “I drove through Athens-Biritos… Pagrati-Koliatsu,” he recalls just before the end of our conversation.