The overall employment forecast for NEO (Συνολικές Προοπτικές Απασχόλησης) for the first quarter of 2023 shows a “positive sign”, amounting to 7%, which is 9% more than in the last quarter of 2022. According to experts, this gives a very optimistic boost to the labor market.

The data is taken from the ManpowerGroup Employment Outlook Survey, according to which 28% of the 520 Greek employers surveyed say they expect an increase in the number of employees, 46% do not expect any changes, and 22% predict a decline.

Employment outlook remains positive for almost all sectors, as Greek employers expect hiring rates to increase in 7 out of 9 sectors in the first quarter of 2023, while no differentiation is expected in the communications sector, with only the Other Services section expected to decline by 6%. 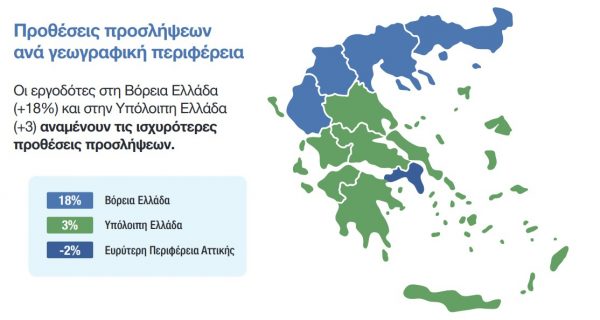 According to a survey by ManpowerGroup (38,000 employers), the seasonally adjusted* global hiring climate remains favorable in the first quarter of 2023. Hiring intentions are positive in 39 of the 41 markets surveyed, with the overall net employment forecast at 23%, but 6% lower than in the fourth quarter of 2022.

The strongest hiring intentions for the next quarter are in Panama (39%), Costa Rica (37%) and Canada (34%). Weakest of all in Poland (-2%) and Hungary (-8%). Employers in Europe, the Middle East and Africa (EMEA) report a slight decline in hiring expectations (18% vs. 21% in the previous quarter). 36% of employers in the region expect an increase in job prospects (we remind you that the corresponding percentage in Greece is 28%), 20% expect a decrease, and 40% do not expect any changes.

ManpowerGroup conducted a survey from October 13 to November 25 among 38,000 employers in 41 countries to assess hiring intentions in the first quarter of 2023. The survey included an analysis of data obtained in response to one question: “How do you think the total number of employees in your area of ​​responsibility will change in the quarter until the end of March 2023 compared to the current quarter?“. 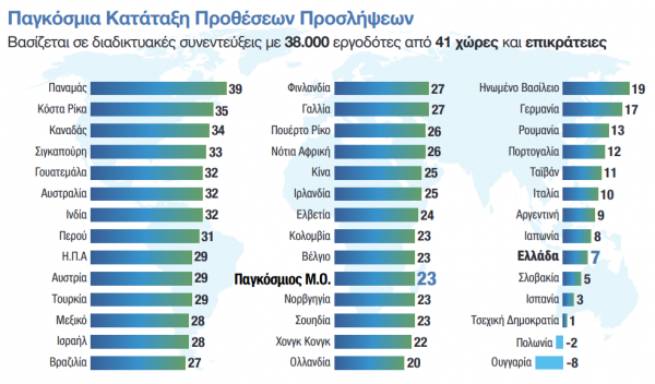