Images of the 25-meter aquarium, which a Berlin hotel razed to the ground a few days ago, are already leaving the Internet, but the question of the causes of the incident still worries the public.

The German expert stated that aquarium, burst in Berlin’s Radisson Blue Hotel was a “time bomb” and the incident should have been foreseen. Herman Schuranm, former owner of Schuran Seawater Equipment, said in part that he was not surprised that the tank had burst.

As a result of the accident that occurred on December 16 at 5.50 in the morning, a mini-tsunami arose in the hotel lobby. About 1,500 fish died, and fortunately, none of the guests were seriously injured.

What led to breakdown of the aquarium “AquaDom” in Berlin

An expert on the construction of such facilities explained that it should have been indicated – the aquarium can have a certain lifespan, some of them can live 25 years, but the risk is growing every year. This impressive structure collapsed after just 19 years, causing complete chaos.

Mr Shuranm says he was asked for a price to build the aquarium over 20 years ago, but decided against it, noting that it was too big and he couldn’t say for sure how long it would last. The German expert also said that the responsibility lies with those who built it, adding that it needs to be checked every two years. “In this case, there is negligence,” he said.

The expert noted that he did not know what process was used to strengthen the structure, but added that if there was no proper preparation, then this led to the appearance of cracks in the glass.

““AquaDom“was to be heated to 80 degrees after completion of construction and again immediately after reconstruction. This is very expensive, but it is possible that this could not be done. If this procedure was not followed, cracks could form“, the German expert told EuroWeekly.

Flooded hotel, rescued fish with buckets
As previously reported, a huge aquarium in the lobby of the Radisson Blu hotel in central Berlin burst at around 5.50 am on December 16, killing 1,500 tropical fish it contained. The AquaDom explosion sent a million liters of water into the reception area and cut off the power to the hotel. Two people were injured by broken glass and were treated at the hospital.

However, the death toll could have been much higher if the accident, which occurred shortly before 6 am, happened an hour later, when the hotel lobby was full of guests. Police said they found no evidence of malice and the cause of the spectacular crash remains unclear. 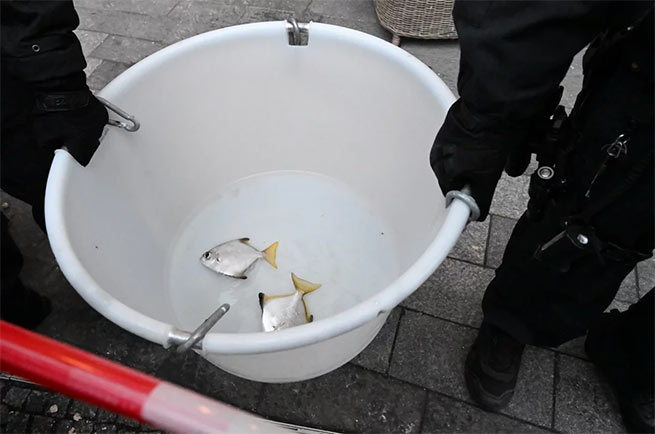 About 400-500 mostly small fish from a separate aquarium located under the hotel lobby were transferred to the adjacent one, which was not affected.

Fish harvested by hand
It should be noted that the aquarium opened in December 2003 and was upgraded in 2020. Footage taken from inside the hotel shows extensive damage to the aquarium, leaving only the frame in an upright position. Broken glass and damaged furniture were scattered around.

Aquarium after the explosion

During repairs in 2020, all water was drained from the tank, and the fish were moved to tanks in the basement of the hotel, where the nursery for breeding them is located, according to the website of the DomAquaree complex.

German newspaper Bild reported that the aquarium only reopened this summer after a two-year renovation that cost around 2.6 million euros.