For more than two months, Athens Municipality crews have been cleaning the walls and painting the roller shutters in the historic commercial center to erase the scribbles that have been a permanent wallpaper for years, especially at night when the shops are closed.

Cleaning department staff focused on walls, marble, metal and stone surfaces, and after consultation with shop owners, the promotion was extended to shop shutters, which had been covered in unsightly patterns for years. To date, 402 businesses in Athens have responded positively to the restoration program and a total of 1,250 shutters have already been restored.

“We visited all the businesses in the area asking for their consent to paint the shutters,” says Deputy Mayor for Sanitation Nikos Avramidis. “Most of the store owners gave their consent, with the exception of two who said no, and another four who painted the graffiti themselves on the shutters of their stores.” Of course, it is worth noting that in many areas of the capital there are graffiti that have nothing to do with the scribbles that were erased from the walls of the center.

The responsible Deputy Mayor emphasizes that the operations to clear walls, pillars and other places from ugly scribbles bring, in general, permanent results, since large surfaces that were cleaned in the center, for example, on Pedion tou Areos field and on Plaka, were not repainted. Often, locals also report to the municipality new cases of vandalism on surfaces that have already been wiped off by cleaners.

For two months, teams from the municipality of Athens cleaned the walls and painted the shutters (pictured right) in the historic commercial center to erase the graffiti that had been a permanent decor for years (pictured top left). 1100 liters of a special liquid were used to create a “film” to protect the now clean (pictured below left) surfaces from any new vandalism in the future.

To date, 402 companies have responded to the cleaning department and a total of 1,250 roller shutters have already been restored. However, there is a possibility that the surfaces are easier to clean if they are protected with a special coating. “We apply an anti-graffiti coating to cleaned surfaces so they can be easily cleaned next time with pressurized hot water,” adds the deputy mayor. The team used 1,100 liters of a special fluid that creates a “film” to protect surfaces from any future vandalism.

The image of downtown without ugly graffiti is completely different, especially these days when holiday decorations are popping up in many places. “The picturesque corners of the city, the facades of shops, the surfaces of historical buildings were covered with many ugly images. Therefore, we had to bring Athens to light. Our work is not over yet. Large anti-graffiti operations will continue,” Athens Mayor Kostas Bakoyannis said. 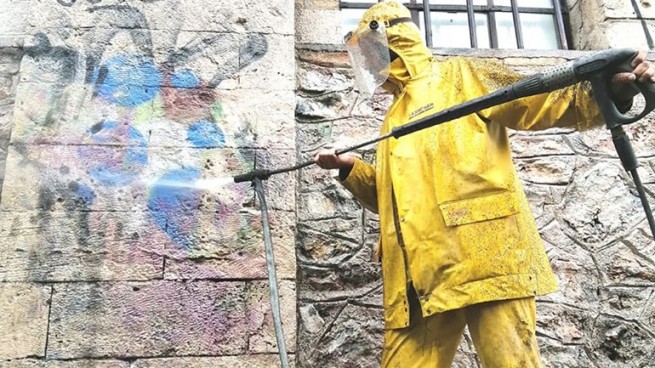 Photo from the 2021 cleanup campaign.

It is worth noting that such measures on the part of the municipality are far from being carried out for the first time. Almost every mayor of the capital of Greece, over the past decades, has been involved in the removal of graffiti (the last similar operation was held in 2021), but after a few months, “artists”, both local and those who come to Athens for “self-expression” (often from other countries in Europe and the world), begin to outline all available surfaces.

It is noteworthy that in 2021 they already used a tool that, in theory, was supposed to prevent the application of graffiti. However, judging by the fact that it is applied again in the same areas, the quality of this coating was not particularly high.

Some of them are talented artists, but the bulk of them are ordinary vandals who depict their perverted fantasies in drug delirium. 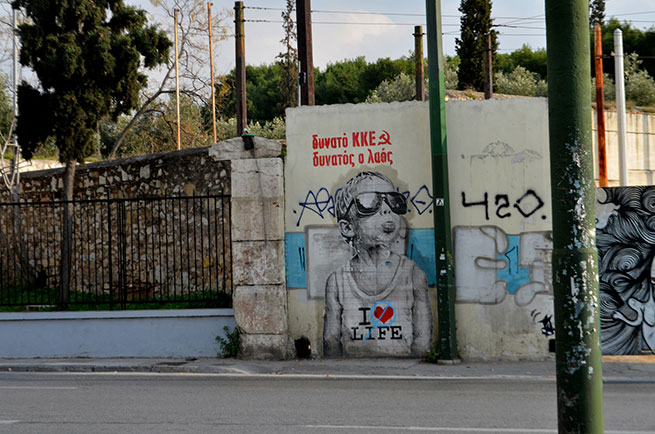 Artists and painters. The painting called SΤMTS, one of the most characteristic works of Stamatis. On top (later) the symbols of the “painters” were applied, as, indeed, were the slogans of the Communist Party of Greece.

Over the past decades, the authorities of Athens have not resolved the issue of punishment for “unfortunate artists”, but this does not prevent the mayor’s office of the capital from constantly hiring new teams of cleaners. Maybe the reason that “painters” are not punished, and protective solutions are not “protective” enough, is precisely in kickbacks from cleaning companies? Or is it a strange coincidence?

PS In order to dispel the negative impression of the publication, I recommend the publication “15 graffiti in Athens with a deep meaning”where you will see really beautiful graffiti.