A group of MEPs asks EU immediately investigate the commercial activities of the family of the head of the European Commission Ursula von der Leyen, in particular, the financing of the company of her husband Heiko von der Leyen, writes the Greek Internet portal newsbreak.gr.

“While the European Parliament has just been shocked by a serious corruption case involving high-profile individuals, 7 deputies demand that the European Union investigate the activities of Heiko von der Leyen, husband of Ursula von der Leyen, figure who has been criticized, among other things, for non-transparent management of vaccine contracts it signed with Pfizer“, – writes the portal.

MEPs write about a potential conflict of interest and call on the Transparency Commissioner to investigate whether Heiko von der Leyen’s leadership positions are compatible with his wife Ursula von der Leyen’s institutional role.

“The husband of the president of the European Commission is taking on a leading managerial role as medical director and CEO in a private company involved in projects funded or co-financed by European programmes, that is, with public money. Questions from EU citizens and their representatives about possible conflicts (of interest) are legitimate,” the letter says.

“In the shadow of Qatar Gate, seven MEPs demand shedding light on the company of a man whose activities are more than questionable,” the article says.

Newsbreak writes that this not the first time that the von der Leyen family has used the position of the head of the European Commission for profit. In late 2017, when Ursula von der Leyen was Germany’s defense minister, it was revealed that she had given away tens of millions to consulting firms, and those expenses were never made public. “Among these companies was the American McKinsey, where one of her sons, David von der Leyen, worked. Obviously, the fact that his mother financed the company helped David become a full-time employee, since initially he was only hired for the summer season,” the article says.

The Greek government, led by Prime Minister Kyriakos Mitsotakis, allocated a colossal amount to this company through “express procedures” 32 million euros. “A lot of people talk about explicit conspiracy, where Mitsotakis distributes millions to Ursula’s husband’s company, and she, in turn, closes her eyes to the outrageous scandals of his government – eavesdropping, disposal of funds from the recovery fund, direct appropriations made in violation of the rules established by the commission, etc.“, – writes the portal. 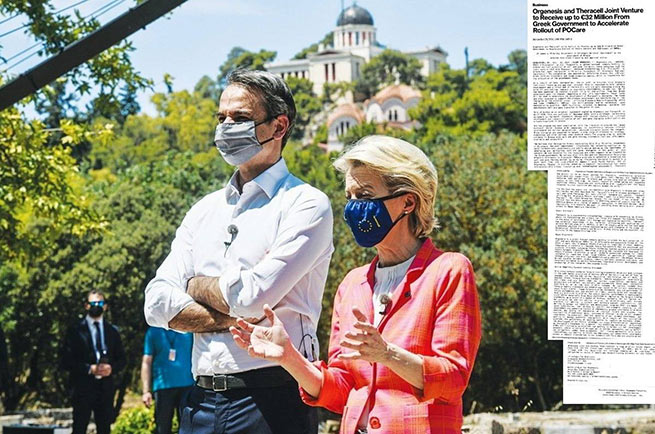 Ursula von der Leyen’s “household” will also have absolutely no problem with rising electricity prices. Her husband’s professional activities seem to be going very well, as he was recently well funded by a multi-zero sum allocated by Mitsotakis from the Greek state budget.

However, in recent days, there has been a noticeable cooling in relations between the president and Greek Prime Minister Kyriakos Mitsotakis, since it was announced twice that they would have dinner together (once in Athens and once in Bulgaria), while the meetings broke down, after which the Greek government again strengthened the von der Leyen family budget.

As reported by Democratia, the husband of the head of the commission, Heiko von der Leyen, participates in a consortium of Theracell Laboratories IKE companies. This community is going to implement in our country an investment project worth 83,000,000 euros called “Personalized cell and gene therapy (POCare model)”. However, these investments will also be supported by the financial support of the Greek state, which can be up to 32 million euros, which is expected to come from both state and European funds. In fact, since March last year, when the corresponding report appeared in Democratia, until today it has been published on the website of Enterprise Greece SA, which is the official resource that publishes the assistance that Greece receives from investors and which was included in Law 4608/2019 on strategic investments.

Established in 2019, Theracell Laboratories IKE joint venture is 50% owned by Orgenesis Inc. and 50% – the Greek company Theracell Advanced Technologies SA In Orgenesis Inc. the husband of the president of the European Commission has been the medical director since December 2020, and was previously a member of the scientific board of the company. And there is no doubt that the company he works for is thriving, thanks to the fact that his wife is at the helm of the European Commission.

May 2021 Europe signed the world’s largest bilateral agreement with Pfizer. President of the European Commission Ursula von der Leyen signed an agreement for the supply of 1.8 billion doses of vaccine against the coronavirus, noting that, “thanks to strong and reliable partners such as Pfizer and the BioNTech group, vaccination in the EU has become more effective.”.

Actually it is worth noting that by April, the European Union had already purchased 600,000,000 doses of the vaccine, which worried international media, who spoke of possible personal interests of the President of the EU, behind the agreement with Pfizer. The lack of transparency in the European Commission has further intensified the public debate, especially after the secrecy missing messagesexchanged between the President of the European Commission and Pfizer CEO Albert Burla.

However, the reality which never saw the light of day, is that Pfizer appears to be related to Orgenesis, where Ursula von der Leyen’s husband is the chief executive.. In particular, the company where Heike von der Leyen works was staffed by former high-ranking employees of the pharmaceutical multinational corporation, since, according to reports, not only Orgenesis vice president Winstead Vandam, but also other company executives, according to their resumes, previously worked in the German pharmaceutical giant.

PS Our editors will not be at all surprised by the fact that the topic of the corruption component in relation Ursula von der Leyen will not receive wide publicity and, like the case with the wiretapping of the opposition, will most likely be leaked. The universal omerta – the mutual guarantee that rules in the corridors of the European Commission – will not allow justice to be carried out.