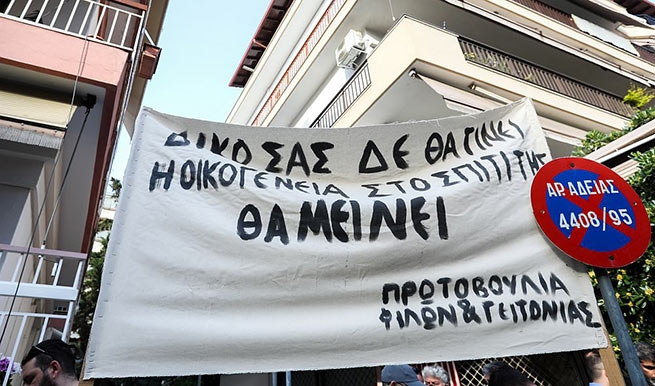 Before the Greek society had time to realize the incident with the eviction of the house of Ioanna Kolova, a new story appeared that shocked all of Greece.

An unemployed woman, a divorced mother of two minor children, was given several days’ notice to leave the house she bought with a loan and is currently unable to pay due to financial inability.

“I don’t know what to do. They (the collectors) bother me every day. I’m unemployed with two kids and they throw me out on the street,” she told ANT1 on the Kalimera Hellas morning program. “They sent a civil engineer, to evaluate the apartment and let me stay until November. I asked them to rent it, but they don’t listen to me. I’m divorced, I’m single, I’m unemployed, I have two minor children.”

The woman reports that her debt has grown to 54,000 euros. “I don’t even have money to pay for transportation. Where will I go? What should I do? I ask for an extension until the end of the school year, but they refuse. Where will I put my children?” she says in a trembling voice. “I’m very worried, and my children too… Who is listening, I want you to understand me, I feel bad, I need help, I don’t know what else do,” says the desperate woman, fearing for her future.

“The only thing that keeps me going is my two kids” – she said.

Lawyer Katerina Fragaki, representing the interests of the unemployed mother, said that the property was valued at more than 130,000 euros, the woman used her savings to buy it and took out an additional loan of 60,000 euros. According to her, she could not be consistent in the payment of contributions, as she remained unemployed, and her debt to the bank was 54,000 euros. She went on to say that the bank had sold the “red loan” for a maximum of 5,000 euros to a collection firm.

According to the lawyer, her client does not fall under the category of vulnerable borrowers, and the house has already been lost, emphasizing that even if the amount due is collected today, it will not be possible to return it. She also indicated that the hearing of the case was scheduled for 2028.

The lawyer suggested that, as the only solution to prevent an unemployed mother with two minor children from being on the street from December 1, the other side would accept “a woman renting a property for a certain period of time. I believe that we will win in court.”