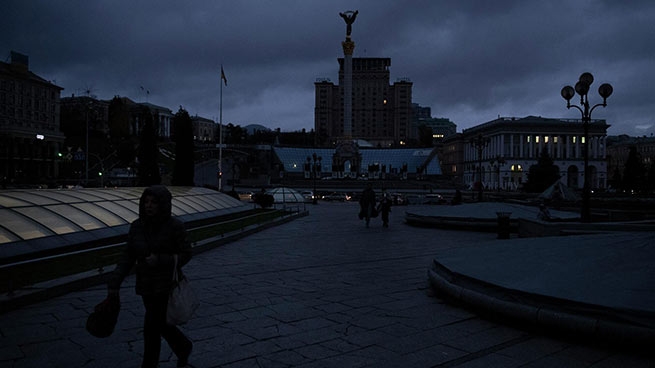 A flurry of Russian missile strikes against Ukrainian energy facilities forced the country to turn off all nuclear power plants located in Ukrainian-controlled territory and triggered a nationwide power outage.

At the same time, neighboring with Ukraine Moldova also reported massive power outages, though not directly affected. “More than half of Moldova was left without electricity,” Deputy Prime Minister Andrei Spinu tweeted.

Massive blackout in 🇲🇩 after today’s Russian attack on 🇺🇦 energy infrastructure. Moldelectrica, 🇲🇩 TSO, is working to reconnect more than 50% of the country to electricity.

He added that the state energy company Moldelectrica is working on connecting more than 50% of the country’s territory to electricity. Moldova again experienced power outages lasting at least an hour last week when one of the power lines was automatically disconnected as a security measure after Russian strikes on infrastructure in Ukraine.

All nuclear power plants in Ukraine and most of the thermal power plants and hydroelectric power stations were de-energized on Wednesday, the Ministry of Energy reports. According to him, the vast majority of consumers are without electricity.

Ukrenergo says that emergency shutdowns will be within a day across the country. And he notes that now it is more difficult to eliminate the destruction due to frost and freezing rain.

The Kyiv city authorities also said that three people were killed in the rocket strikes, and the head of the region said that critical infrastructure and houses were damaged.

“Among those killed in Russian airstrikes on Kyiv this afternoon is a 17-year-old girl,” Mayor Vitali Klitschko said. “Three people died and at least 11 were injured in the impact,” he added.

Three people, including a 17-year-old girl, were victims of today’s Russian shelling of Kyiv, said the mayor of the city, Vitali Klitschko. https://t.co/SjaJtCwDYU pic.twitter.com/QWe8USUzva

Earlier, an air strike warning was sounded throughout Ukraine, and the Ukrainian media reported the activation of air defense systems in several parts of the country.

“Putin wants to terrorize people, making them freeze without electricity,” and thus put pressure on the president of Ukraine, said Kyiv Mayor Vitali Klitschko. He warned that “part of the city may have to be evacuated”, although the authorities do not want this. https://t.co/pkAj75eUPp pic.twitter.com/uGIvoQcUas

“Putin wants to terrorize people, making them freeze without electricity” and thus put pressure on the president of Ukraine, said Kyiv Mayor Vitali Klitschko. He warned that “part of the city may have to be evacuated,” although the country’s leadership does not want this.

This video published by Kyiv Oblast Police Chief Andriy Nebytov shows the aftermath of the Russian missile strike on a residential building in Vyshgorod, a suburb just north of Kyiv.

In total more than 20 people were injured as a result of the Nov. 23 attack on Kyiv Oblast. pic.twitter.com/6K32Ovl1Gi

In addition to Russian attacks on the energy infrastructure of Ukraine, a maternity hospital in the city of Volnyansk, Zaporozhye region, was hit by a missile attack at night, resulting in the death of a newborn, Governor Oleksandr Starukh said on Telegram.

Fierce fighting is reported on the front line near the towns of Bakhmut and Avdiivka.