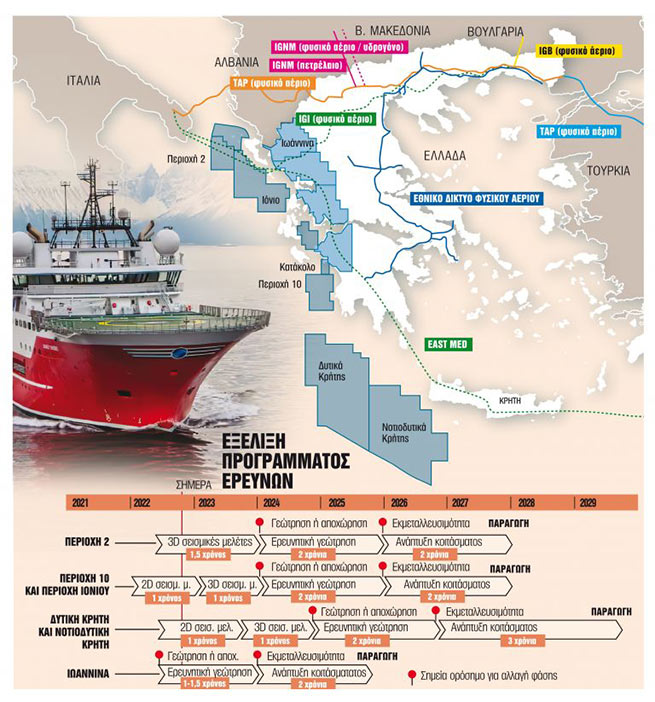 What is hidden behind another attempt by the Greek authorities to exploit hydrocarbon reserves, if, of course, they exist in quantities suitable for industrial production and exploitation.

Four true answers about natural gas deposits in the country’s six concessions provide compelling answers to four main mythswhich have been circulating for about 20 days since the start of large-scale seismic surveys in the seas of Crete and the Ionian Sea.

The public debate and especially the social media space, following the announcement of the arrival of the Sanco Swift vessel to carry out seismic surveys in the two offshore concessions “West” and “South-West” of Crete, which were granted by the Greek state to the oil companies ExxonMobil – Helleniq Energy, were flooded with information about the size of the deposits and why these areas have not been explored for so many years.

Myths and reality
Christos Kolonas, columnist for TA NEA, talks about the truths and myths surrounding the country’s new attempt to harness the wealth of hydrocarbons if they finally exist in sufficient quantities to be mined and exploited.

First myth related to the size of underground gas reserves in the country. Both insiders and non-insiders have released estimates of how much gas is hidden in the geological structures of the six blocks. These are “West of Crete” and “South-West of Crete”, “Block 2”, “Ionian”, “Block 10 – Cypress Bay” in the Ionian Sea and the land block “Ioannina”.

First realitywhich answers this myth is that the above estimates are based on the interpretation of data obtained during the large seismic surveys of 2010-2011 on 24 offshore blocks. The interpretation of 2D seismic vessel data is indeed a scientific practice that then leads oil companies to identify potential drilling targets. However, according to geologists and company executives, they are by no means a reliable basis for accurately determining the volume of hydrocarbon reserves. The only reality is fixed by drilling.

Second myth is related to why we have not explored and produced oil or gas in our country for so many years. More precisely, the one that saw the light says that, for example, “the Americans won’t let us.”

The second reality answer to this myth is that years have passed since 2012 and 2013, when the first tenders were announced, during which it took a long time for concession agreements with investors to be ratified by Parliament. There was no clear political will to deter concessionaires, and a series of administrative hurdles (environmental permits) and opposition from citizen groups made investors think twice, constantly asking them to postpone their research projects. In addition, the transition EU on green energy, coupled with the pandemic that crashed oil prices, forced oil companies to return concessions to the Greek state or even withdraw from Greece.

Third myth due to the fact that the country has the largest deposits in the southeastern Mediterranean.

third realitythat answers this myth is that in order to establish this, drilling is necessary. And we still have a few more years to do so. But even if this can be done, the chances of success are slim. According to international experience, they range from 15% to 25%.

Fourth myth is that at such oil prices, oil companies can safely continue drilling.

fourth reality is that the cost of drilling has now risen sharply due to difficulties in the supply chain. According to companies renting drilling rigs, the cost of renting drilling rigs per day has increased to 300-400 thousand dollars. In general, projects with a depth of 1500 m can be implemented at a cost of less than $27 (per barrel of oil equivalent). At a depth of 4000 m, costs can increase by about 25% or an additional $4-5 per barrel of oil equivalent. Of course, one well is not enough to give a clear idea of ​​the volume of reserves. Each potential target would have to drill three to four wells at three to four locations, with a total cost that could exceed $700 million.