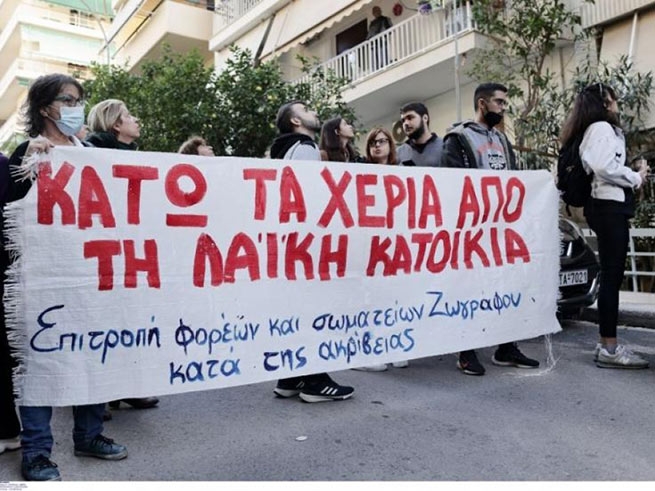 The heartless footage of the bailiff and the police smashing the door of Ioanna Colova’s apartment in order to drive her out of the only house with a power saw was a “stab in the heart” for all Greeks, as they realized that it was very easy for anyone to find themselves in the same position.

And all this for the sake of a debt of 15,000 euros, which has yet to be studied and figured out how it was created. N. Bruzoukis, secretary of the bailiffs, stated that such behavior, which was made public, was not in line with the profession of a bailiff, since “they wrongfully broke down the door and wrongfully prevented her from getting her personal belongings.”

As the secretary of bailiffs explained in a conversation with OPEN“We enter houses legally.” The removal of a person from a house sold at auction takes place according to certain rules, and not as shown in the video and photographs, which can only be described as a “gangster raid.”

If the house is closed or the previous owner does not want to leave, there should be a locksmith on the bailiff team who will open the door. They don’t break down the door to let the bailiffs in. At the same time, the secretary of the bailiffs explained that his colleagues were wrong in not allowing Ioanna Kolov to take their things, because, according to her, there was an eviction from the apartment, and not a confiscation of property. The previous owner can take whatever he wants from personal effects and all movable property in the house.

In short, it wasn’t a legal invasion of the journalist’s home, but… legally, they would take it away from her. The problem lies in the procedures, not the substance. The fact that a modest pensioner was left homeless does not bother anyone.

Greeks are particularly exposed to the new generation of bad loans created by the rising cost of living and rising interest rates. At the same time, many have old, so-called. “red loans” of previous years of “economic prosperity.” But now we need a solution to the problem. Yesterday, a problem literally “knocked” at the house of a retired journalist, Ioann Kolov, when bailiffs rushed to her at 5 in the morning, breaking the door, today or tomorrow tens, or even hundreds of thousands of other people could be in her place.

The decision must be immediate and sustainable to adjust the existing bankruptcy code and out-of-court mechanism, as we are facing a very serious social problem that has already become political. More than 44 thousand auctions are planned for 2022, which relate to the only housing.

44 thousand households will lose their homes.

“Those of us who have experience with foundations,” writes an In.gr columnist. Yannis Rapatisknow that they operate out of control and in total disarray, and it is typical that they do not even formally respond to requests for regulation. And if… they answer that they want to receive large amounts of money to start the process of any discussion, not negotiations, while there is no obligation on their part regarding the content of any agreement.

As rightly pointed out by the Plenum of the Greek Bar Associations, a benevolent state must take care of its financially weak citizens and protect their first home, especially in the difficult circumstances that we are going through. The Bank of Greece’s mention of claims management companies reflected in its Financial Stability Report November 2022 is cause for alarm and deep concern.

“In particular, on page 91 of this report, the Bank of Greece notes that the ability of these companies to manage loans is hampered by the recent decision of the Supreme Court 822/2022 and the relevant appeal decisions regarding their legitimacy to take legal action, and especially to participate in auction procedures, announces, in fact, removal of these restrictions, established by court decisions, in the coming months – either through an appropriate legislative initiative, which the Minister of Finance has publicly refuted, or by overturning the decision of the Supreme Court by the Plenum of the Court, where the specific litigation is being considered, the announcement concludes. Judgments are made by the competent courts after deliberating cases and taking into account the available evidence. The Bank of Greece has no right to interfere. Decisions are made by judges, not by bankers and foundations.”

So, what is immediately needed here is government intervention against the impunity of foundations and service organizations, and the implementation of a policy to protect the first home, but also a redesign of the existing structure to allow real regulation of citizens’ debts. And this must be done immediately, because there is a real danger that we will see scenes similar to what happened in Spain – with the mass evictions of citizens from their homes a few years ago.

For two years the media write about skyrocketing real estate prices, thus trying to create an image of imaginary prosperity, when a Greek, with his steep salary of 700 euros, buys houses worth 300,000, apparently finding money in the air. However, the situation is completely different: real estate is confiscated for a penny, and those who take it, as in the case described above, sell it at exorbitant prices to foreigners who, today, acquire 8 out of 10 properties in Greece.

*The author tried to help a friend whose property was sold at auction without even notifying him of what had happened. When the lawyers found out who was behind the purchase, they refused to challenge the procedure. Refused, after clarifying the situation, even … a well-known left-wing politician who actively positioned himself as a person who “solves” such problems.