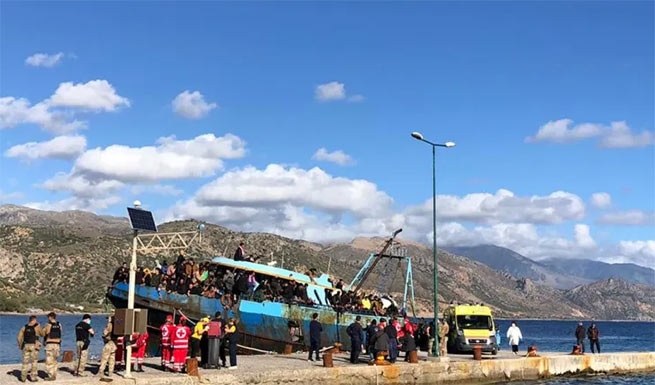 A fishing boat has docked at the port of Palaiochora in Chania, Crete, carrying 500 migrants on board, according to the port authorities. The ship drifted in the sea area south of Crete, causing alarm to the coast guard.

An old fishing boat 25 meters long, full of people, was in a difficult position at night, 15 miles south of the Paleochora coast of Crete and, according to local media, a distress call was sent through the 112 service at one in the morning. The ship’s engine failed (it would be surprising if this did not happen, given its condition. Editor’s note.).

Due to unfavorable weather conditions in the area where the fishing vessel was located, with a prevailing westerly wind of seven Beauforts and a storm of at least magnitude 8 expected in the coming hours, it was not possible to transfer the migrants to other vessels. By decision of the coast guard, the fishing vessel was towed by two Italian vessels to the port of Paleochora. The rescue operation involved three cargo ships and a Coast Guard patrol boat. Arrived at the scene Navy frigate and rescuers.

A Red Cross team, doctors and other agencies are already at the port to help the migrants who are said to have left Libya with their final destination in Italy. According to the first information, there are 22 women and 25 children among the immigrant refugees, while the Syrians (according to them) are about 350 people.

According to the Coast Guard, passengers still aboard the fishing vessel will spend the night on the ANENDYK vessel Samaria, which sails to Gavdos Island, and will be transferred to refugee facilities in the next few days.

It is not yet known whether they will be sent further to Italy or left in Greece, but this is an alarming signal. After the right-wing government came to power in Italy Meloni, which announced the fight against illegal migration, the smugglers were faced with a choice of where to send migrants who want to live in Europe. It is likely that this ship was the first sign …