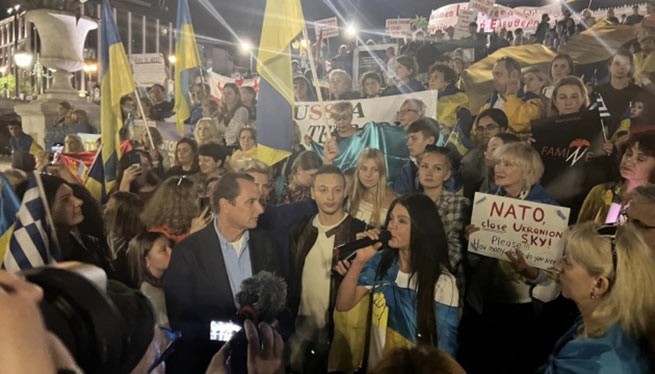 About a hundred Ukrainians living in Greece held a rally in the central square of Athens, Syntagma, under the slogan “No negotiations with terrorists,” the Ukrainian embassy in Greece reports.

Along with the Ukrainian community and refugees who arrived from Ukraine, Ukrainian Ambassador Sergiy Shutenko and singer Ruslana Lyzhychko took part in the events.

As specified in the Ukrainian Embassy in Greece, the rally participants appealed to all people present on the square with an appeal for military support for Ukraine, recognition of Russia as a terrorist country and refusal of any negotiations with Russia.

The ambassador also recalled the celebration of the 9th anniversary of the Maidan, which, according to him, became “the first victorious battle of this war.” And Ruslana Lyzhychko thanked the Ukrainians of Greece for their active position and noted that such actions are “also our weapon, which helps and contributes to the acceleration in making important political decisions.”

At the end of the action, the participants of the rally sang together with Ruslana the famous song “Oh, there is a red viburnum near the puddle”, including in Greek.