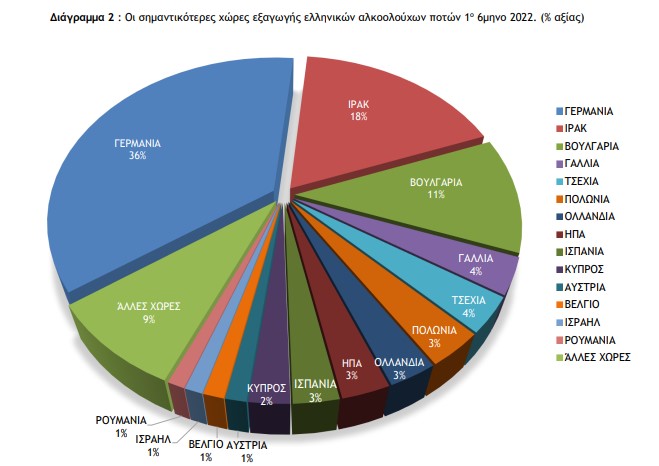 Iraq remained in 2nd place for destinations of Greek alcoholic beverages, and Bulgaria was in 3rd place, exports to which increased by 19% compared to the first half of 2021.

In 4th place were France (up from 11th in the first half of 2021) and the Czech Republic, followed by Poland, the Netherlands, the United States, Spain and Cyprus.

Ouzo remains the leader of the Greek export of alcoholic beverages, despite the fact that he has to compete with the corresponding drinks from countries such as Italy, Spain, France, etc. The traditional Greek alcoholic beverage has always been the main export product of the country’s distilleries, ranking in the first half of 2022 64% of the value and 73% of the quantity of all exports of Greek spirits. In particular, an increase of 4.3% in value and 7.6% in quantity was recorded compared to the corresponding period in 2021, with European countries being the main consumers of the strong drink ouzo. Germany in the first quarter of 2022 owned 37.84% of the total by value and 43.35% by volume.

Finally, exports of tsipouro and tsikoudya, although representing a very small share (2%) of total exports, still show significant growth all the time. In particular, in the first half of 2022, an increase of 14% in value and 23% in quantity was recorded compared to the corresponding period in 2021.