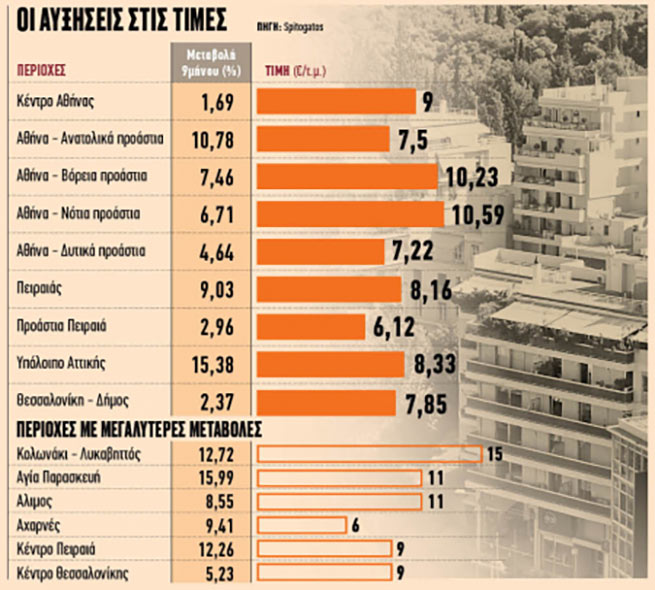 Rents in major urban centers in Greece are skyrocketing, as are the demands of landlords. The reasons are varied, but mostly it is the growth of the so-called “subjective prices”, as well as the growth of property taxes and inflation.

Access to decent and affordable housing is becoming a huge challenge for hundreds of thousands of renters, especially in major urban centers, as prices and landlord demands have skyrocketed while incomes have stagnated, the newspaper said Friday. TaNea.

From 2015, when rental prices were at their lowest in a decade, they are up 48.7% this year, according to the SPI Price Index, which reflects a long-term trend based on data from Spitogatos announcements. Now the rent problem has reached enormous proportions, creating hard conditions not only for the vulnerable and economically weak segments of the population, but also for middle-income households.

Lease agreements are not renewed

The required increase is, at best, around 10%, and in areas with high demand and low supply of rental housing, it reaches even 25-30%. Since too many leases have been concluded indefinitely and the owners do not renew them, the landlord may one day come and ask you for a 30% surcharge, as happened with the tenant in the center of Piraeus, who for an apartment of 97 sq.m. pays 550 euros per month. The landlord told him that the amount of tax [доход от аренды] in conjunction with ENFIA [налогом на имущество] makes the lease unprofitable for him, so the raise is mandatory.

According to the website Spitogatos, in the first nine months of this year, rents in Attica and Thessaloniki rose from 1.69% to 15.38%, compared to the corresponding period in 2021.

Approximate increase in prices in%: the center of Athens – Athens East-North-South-West – Piraeus, etc.

During this period, the areas that recorded the largest percentage change in the amount of rent for housing is Agia Paraskevi, where the rent increased by 15.99%, to 11 euros per sq.m. monthly; the area of ​​Kolonaki-Lycabettus, where the rent increased by 12.72%, reaching 15 euros per sq.m. per month; Rounding out the top three is the center of Piraeus, an area in which housing rents have risen by 12.26% in the last 9 months compared to the corresponding period in 2021.

And all this despite the fact that, according to the Institute of Labor (INE) GSEE, since April 2022, the decrease in the purchasing power of the minimum wage in Greece is about 19% (according to the author of the publication, this is a significantly underestimated figure). The loss in purchasing power of households with a monthly income of less than 750 euros is up to 40%, and for families with an income level of up to 1100 euros, the decrease is from 9% to 14%. In the highest income groups, the loss in purchasing power is less than 11% and decreases as income increases.

Profile of the most popular requirements

In all regions of Attica, the first place in the list of characteristics that determine the choice of interested tenants, according to a survey by the real estate network Re/Max Hellas, is the good condition of the property, i.e. also has new buildings (86% and 79% respectively), and the availability of parking (64%) and proximity to public transport stops (50%) also play a decisive role in the decision to rent. The availability of renovation (90%), an elevator (60%) and a parking space (60%) are the three main characteristics that interested tenants look for in a property.

Since early 2022, there has been a rapidly growing number of landlords who have successfully — or less successfully — threatened tenants with eviction if they do not agree to pay higher rents. This practice is common when the lease term is coming to an end and the tenant has to pay a tidy sum to renew it. “Because there are no free houses, and at the same time, moving costs a lot of money,” so the owner of an apartment of 85 sq.m. in Peristeri [западные Афины] told her tenants, a family with two children aged 13 and 15, when she announced to them that the rent should rise from 470 euros to 620 euros. The family of four, after unsuccessfully searching for an apartment costing no more than 500 euros in the area so that the children would not change schools, finally agreed to pay the higher price.

In another case, the tenant of an apartment in Moschato [юго-запад Афин] was forced to move out because the landlord demanded a 30% increase in rent. Less than a month after the previous tenant moved out, the owner rented the property for 1,100 euros, compared to 700 from the previous tenant.

In an apartment building in Alimos [южные Афины] owner of three apartments, 120 sq.m. each, raised the rent by 300 euros (from 800 to 1100 euros), while there was a (verbal) condition for the payment of six months’ rent at the beginning of each year. In fact, in order to sign the contract, the tenants had to agree that the amount that would appear in the tax office would be equal to half (550 euros).

Real estate market professionals cite the transfer of a large number of properties from long-term leases to short-term leases (such as AIRBNB) as one of the main reasons. According to professionals, this brings significantly more profit at lower operating costs. For example, there are more than 55,000 short-term apartments in Athens alone.

The authorities of large cities and tourist areas are seriously concerned about the situation in the rental market. The reason is that rents in many areas of Greece, especially in Athens and Thessaloniki, have approached (and sometimes exceeded) the minimum wage. This has hit especially hard young families and low-paid workers who are forced to quit their jobs and move to their parents or to cheaper areas.

Both businessmen and government agencies, faced with a lack of staff, turned to the government with a demand to introduce regulation for short-term rentals.