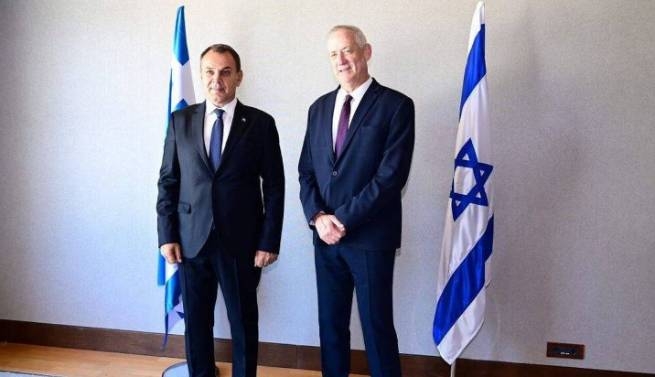 A busy agenda today in Athens at Israeli Defense Minister Benny Gantz, who is arriving in the Greek capital on an official visit for contacts with Nikos Panagiotopoulos.

The meeting will take place a few weeks after the unexpected cancellation of the visit of the head of the Israeli department to the opening of the Kalamata International Aviation Center. At that time, Athens could not hide its displeasure – the information about the cancellation of the visit came only the night before, but mostly about the trip of the Israeli minister to Ankara to meet with his Turkish counterpart Hulusi Akar.

But the return of Netanyahu seems to change the situation again: Gantz is coming to Greece to restore balance in relations between the two countries. After all, both Greece and Israel have open questions both in the field of armaments and in the broader plan of defense cooperation.

Although the Israeli side asks not to advertise its participation in the exercises, it is known that recently, more and more units of the Israeli Armed Forces have been arriving for joint exercises in Greece. Only a few days ago, the NIRIIS-22 naval exercise was completed, where two Israeli rapid patrol guided missiles took part: they fired real fire and participated in surface, anti-submarine and air defense scenarios, as well as in exercises to combat asymmetric threats.

Earlier this month, Greece and Israel also cooperated in the air, with Greek fighter jets being refueled by an Israeli flying tanker. In July last year, eight F-16s from the 115th Fighter Wing were stationed in Israel, irritating Ankara, which did not detect them with its radars. There is information about preparations for joint exercises with the ground forces.

The list of Israeli equipment that Greece is interested in is quite long. The islands of the eastern Aegean have already installed a system to combat unmanned aerial vehicles, and Athens has agreed to lease Israeli Heron UAVs operating from Skyros. And at the same time expressing interest in deliveries and a version capable of carrying weapons. The subject of discussion for several weeks is the agreement on the “lethal” Spike NLOS missiles: first for the surface and sea version, and then for attack helicopters of the army air force. This is because negotiations are already under way with the Israelis to upgrade 19 Apache AH-64As that will carry the Spike.

However, there are several unresolved issues, such as the Rampage long-range supersonic missiles and the Spice collection, which have been recommended by Air Force Headquarters and will “boost” the firepower of the Greek F-16s. The rather acute issue of supporting the C-130 transport aircraft, which Israel is interested in acquiring, remains unresolved, but military sources emphasize that there are many problems that have yet to be overcome, the main of which is the method of transporting the aircraft, writes CNN Greece.

However, undoubtedly, the most important area of ​​cooperation between the two countries, which will be brought to the table of today’s discussions, is the provision of information that is of decisive importance for the national interests and security of the country. Cooperation in the field of early warning of emerging and hybrid threats is a key issue for the country’s security and stability in the region as a whole.

Nikos Panayotopoulos, after welcoming Benny Gantz at the Ministry of National Defense, will have a personal meeting with the Israeli minister, followed by extended talks between the two delegations. It is emphasized that Gantz’s visit “provides an opportunity to confirm the importance of the strong long-standing ties of friendship and cooperation between Greece and Israel, their relations in the field of strategic defense.”