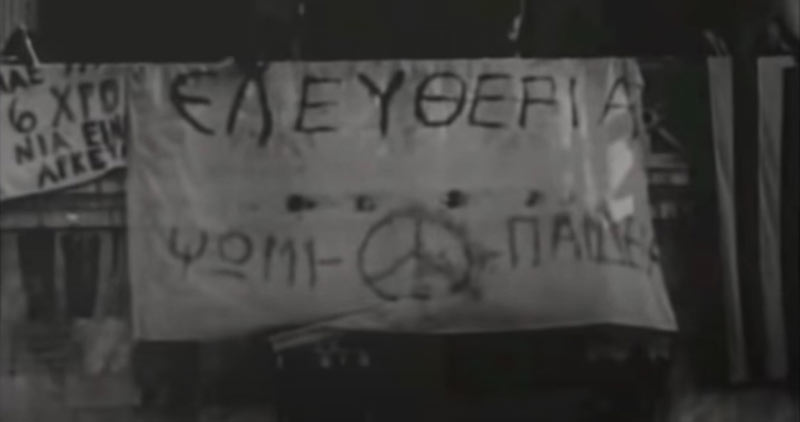 The shocking confession of the fatal tank driver A. Skevofilaks, who drove into the Polytechnic in a combat vehicle.

When you hear “Polytechno”, the first image that probably comes to mind is a tank rushing inside the university and tearing down the gates along with dozens of students who hung on them, defending the highest good of life.

The driver who drove a heavy car into the Polytechnic Institute became the “personification” of a crime against the people of Greece. The one who destroyed all the “fairy tales” about the absence of deaths during the junta, at some point broke his silence. He was ashamed of who he was, of what he did, of what he believed in.

Private A. Skevofilaksa died in a car accident. He said this because he was ashamed. Until 20 years later, he decided he needed to pour out repentance. He told this story to his wife with great difficulty, but he did not dare to tell his children.

Until he spoke to Vima reporters to let the world know…

“That day I was on duty. I served in the army for ten months. I was an instructor at the tank center in Goody. At that time, the Blackshirts were a selective corps. I volunteered. As soon as the riots began, we were alerted. “Communists are burning Athens,” they said, and we believed them. I remember that in the camp some had radios, and we secretly listened to the station of the Polytechnic Institute. “You communist bastards will have a good time!” – we said.

The driver in the first released tank

“Half an hour after midnight on November 16, my detachment received an order to prepare to leave. It was decided to withdraw five of our tanks, several French AMX30s from the unit. I was the driver of the first tank that drove onto the road.” In the same tank were Officer Michalis Gunelas as commander, Sergeant Lambros Constantellos as co-driver, and Sergeants Stelios Embalomenos and Giannis Tirpas.

“People were screaming ‘we are brothers’ but I wanted to eat them.”

“At 1.15 am on November 17, we arrived at the intersection of Alexandras and Kifisias avenues. A little later, we crossed Alexandras, when at the level IKA, at the Sonya stop, we stopped because the road was closed. There were barricades, fires and immobilized buses. With the help of various maneuvers left-right, back and forth, I cleared the road, and we drove on. When we got to the intersection of Alexandra Street and Patision Street, we were ordered to stop. There, in the Egypt Square, we stayed for about an hour. I remember people shouting to us: “We are brothers, we are brothers.” I wanted to eat them.

The news that the tanks took to the streets was broadcast on the radio of the Polytechnic Institute: “They will not beat children, our brothers and sisters, soldiers, the fortress of freedom, the only part of Greece that is free. We have no weapons. We present our open breast”.

A. Skevofilaks continued the story: “We were told to drive up and stop near the Polytechnic Institute, but not in front of the gate, which we did. We stopped a few meters from the gate. Arriving at the main gate (ed. It was already two in the morning), I turned around tank towards the Polytechnic Institute, turning the gun back. I remember getting up from my seat, as well as other crew members. Dozens of students were hanging from the gate bars, and hundreds more were in the courtyard. They were in a panic. And I, just think looked at them like they were bugs that wanted to be eaten!”

“Τσογλάνια, you are a disgrace to the troops”

At a quarter to three in the morning, as the students sang the national anthem, the military warned the students a few minutes in advance to leave the Polytechnic Institute and surrender. A Mercedes car is parked outside the gate, blocking its opening. The commander of a tank platoon is irritated and angrily shouts: “Τσογλάνια, you are a disgrace to the troops,” and gives a signal. 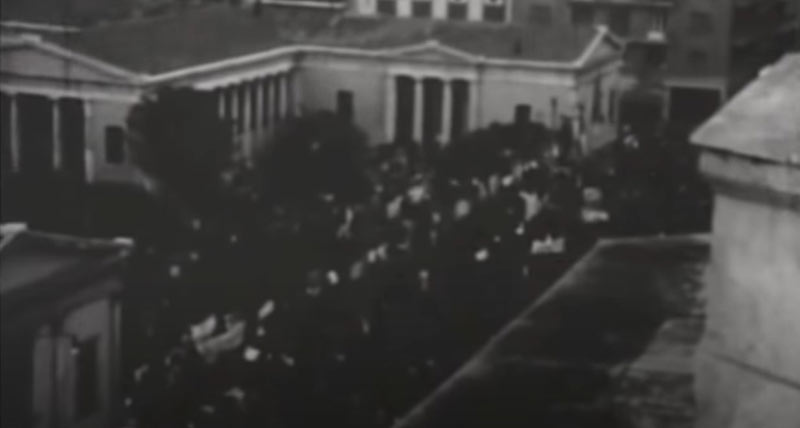 “If I drove in at speed, I would kill dozens of people”

“Then the tank driver came up to me and said: “We go in and take out the gate. Get ready! I took a position and pressed the pedal. I couldn’t see much, I had a bad view, because now I was looking through the hatch of the tank. Ten centimeters from the gate, I stopped. I deliberately stopped. This can be seen on the video of that time. When braking, the frightened students ran back. If I had entered at speed, I would have killed dozens of people who were hanging from the gate at that moment.”

“I smeared the Mercedes into a cake”

A few minutes later A. Skevofilaks pressed the gas pedal, the tank roared. The grate fell immediately. There was a Mercedes parked outside the iron gate, which the students had put down to block the entrance. I smeared it into a cake. The left caterpillar passed over the car, turning it into a pancake. As soon as the gates of the Polytechnic Institute fell down, the police entered the building to arrest the students. Shortly thereafter, I got off the tank and entered the Polytechnic Institute. Nobody died. But there may have been dead.” 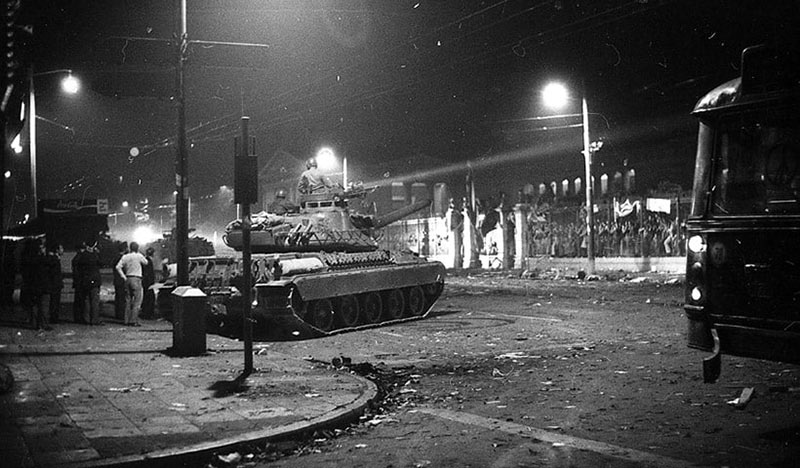 “Shut up you brat or I’ll kill you.”
According to Mr. Skevofilaks, “The police chased and beat the students wherever they found them. If they hadn’t been stopped by LOKA – I remember getting into a fight with them many times – I don’t know what would have happened. in the yard of the Polytechnic Institute they were severely beaten, I remember seeing many wounded and three or four lying motionless I don’t know if they were dead I didn’t look to see At some point one of the students rushed towards me and said: “What do you understand now that you’ve come in?”. I was stunned. I took out a gun and, holding it out, turned around and shouted: “Shut up, you son of a bitch, or I will kill you.” This student does not know how to lucky at that moment … If he had said even a word, I would have killed him! That’s the kind of guy I was. Fascist. “

“What I’ve done?”
A. Skevofilaks recalls: “When the students passed by, I remember that they threw packs of cigarettes and everything they had with them into the tank. When we returned to Goody, the tank looked like a pavilion. To think that the students gave us sandwiches and cigarettes after what we did to them… I can’t forgive myself for that. I think about what I went and did!”.

“I felt proud. I was a fascist too.”
When he returned to Gudi, to the base of the armored corps, A. Skevofilax was greeted with joyful exclamations: “When we returned to the camp, I became a hero. Then I felt that I was someone, that I had done something good, that “Something great. I became a hero who defeated the enemies of the Motherland, the “damned commies,” as we then called students. That’s what they told me, that’s what I believed. I felt proud. I was also a fascist.” 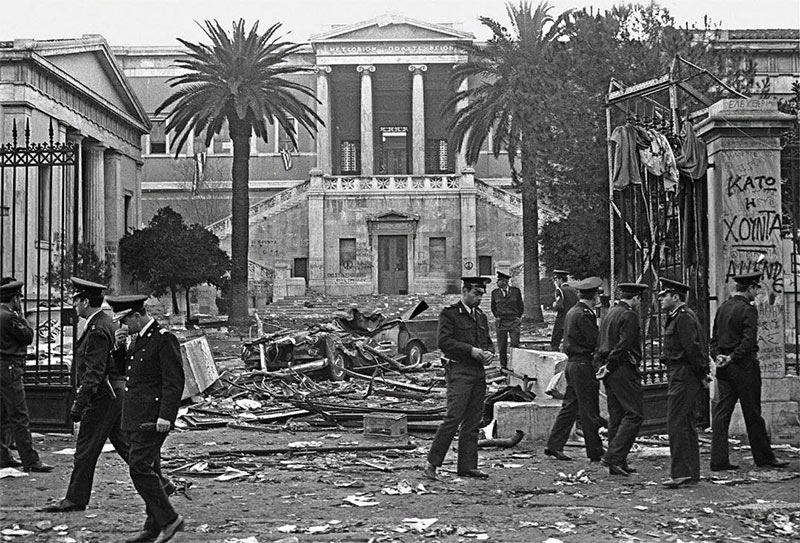 “The next week I was stopped by Ioannidis. I was again on the alert. We were taken to ΓΕΣ. In the courtyard we took up positions. We did not know why we were there. They did not tell us. When we returned to Goudi, we learned that Papadopoulos was overthrown. Then something changed in me. People who used to think he was a god now cursed him. I couldn’t understand it. “But are they all so corrupt?” I asked myself. They go where the wind blows. wind. Sellable skins, I said to myself. I remember that Michael Vinelas gave his patches to the people from ΕΣΑ who came to the center and arrested him.

In Western Athens, where he lived with his parents and two brothers, he was looking for a job: “At this place my life changed 180 degrees. I did any job imaginable. As a worker, I realized that I could not the same requirements as the employers. I was taught to hate the communists, I voted for the KKE twice!”. 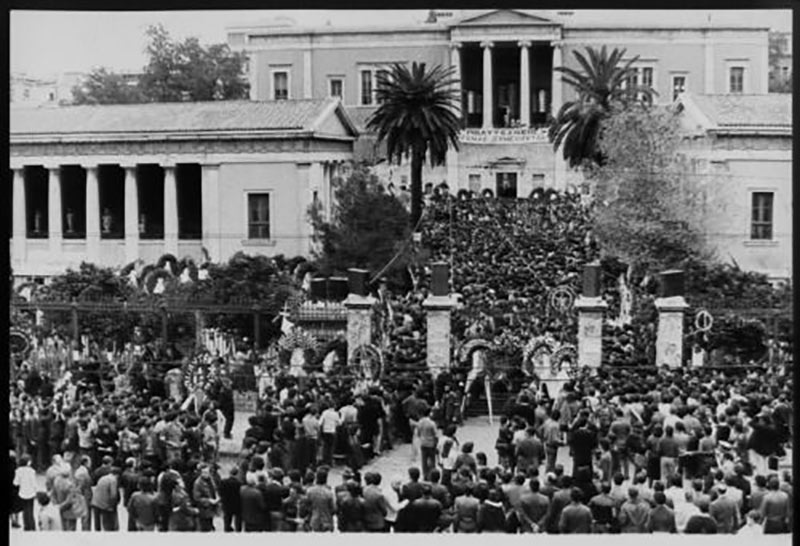 “He’s my cousin, distant. He died in a car accident.”

“Many years ago at work, someone heard my name and asked if I was related to the “tanker” from the Polytechnic. “He is my cousin, distant. He died in a car accident,” I replied. I am a man who was never 20 years old. Reserve soldier A. Skevophylax died in a car accident! My friends do not know who I am, and neither do all the neighbors. Only my wife knows. I told her years later. I haven’t told my children yet. I’m ashamed of who I was, of what I’ve done. Anyone could have taken my place, after all, I was a soldier. But that doesn’t set me free from responsibility. Until I got in, I believed in what I was doing. Then it became the nightmare of my life.”

Of the people who resisted the junta, he spoke in flattering terms: “They had a great soul. I do not know if this makes sense, but I would like to apologize to them.” The driver of the tank that drove into the Polytechnic Institute will not forget the young student who was seriously injured during the tank invasion, today she is a professor at the University of Athens, Ms. Pepi Rigopulu. “I believe that if I see her today, I won’t know what to say to her. Many times over the years it occurred to me to meet her, but I stopped. I would like to see her, tell her … But I I do not dare. Words of excuses do not erase deeds.