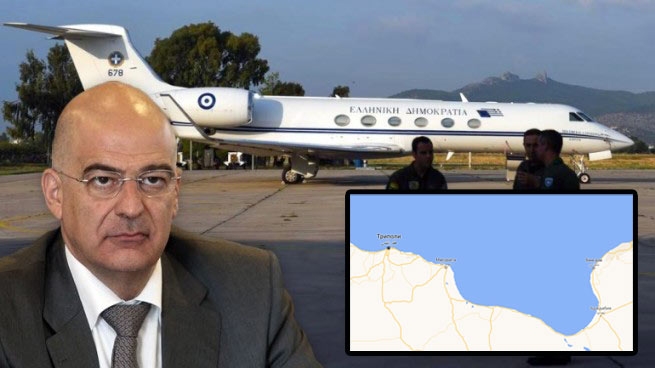 Dbeiba’s Turkey-friendly transitional government in Libya set a trap for the head of Greek diplomacy during a visit to Tripoli.

The Greek Foreign Ministry was brief in covering the situation with the visit. describing it, as a failed. The plane with N. Dendias landed in Tripoli so that the Minister of Foreign Affairs could meet with the head of the Presidential Council of Libya, Mohamed Menfi, and there was, as he says, “an agreement with the Turkish government of Tripoli and its own Ministry of Foreign Affairs, so that there was no meeting with them.”

However, after arrival Greek foreign ministers at Tripoli airport told him that he would be received by the foreign minister of the Libyan government, which had signed an illegal “memorandum” with Turkey. In other words, N. Dendias was offered to go to the pro-Turkish government of Libya, which the head of the Greek Foreign Ministry refused and decided to fly back.

What did the Libyan Foreign Ministry say? “Nikos Dendias arrived in Tripoli but refused to get off the plane and decided to leave soon after. Foreign Minister Naila Al-Mangush was waiting to greet him. We condemn this and will take action.”

Leaks from the Foreign Ministry reported that on the eve of the visit, Menfi asked the minister to also go to Tripoli to meet with him. The appointment was made on the condition that only he could see him, and no one else would, and this was considered true!

However, as it turned out, Nikos Dendia was waiting at the Tripoli airport for the Foreign Minister of the Transitional Government, Dbeiba Naila Al Mangus, who in October signed a Turkish-Libyan agreement with Turkish Foreign Minister Mevlut Cavusoglu, based on the 2019 Turkish agreement, the Libyan memorandum, according to which the Turks occupy the Greek continental shelf.

Negotiations ensued, during which the plane on which Nikos Dendias was flying was never lowered, and in the end it was decided to cancel the visit to Tripoli and continue the trip of the Greek Foreign Minister to Benghazi to meet with the elected Speaker of the House of Representatives Aguila Saleh Issa , as well as other Libyan officials.