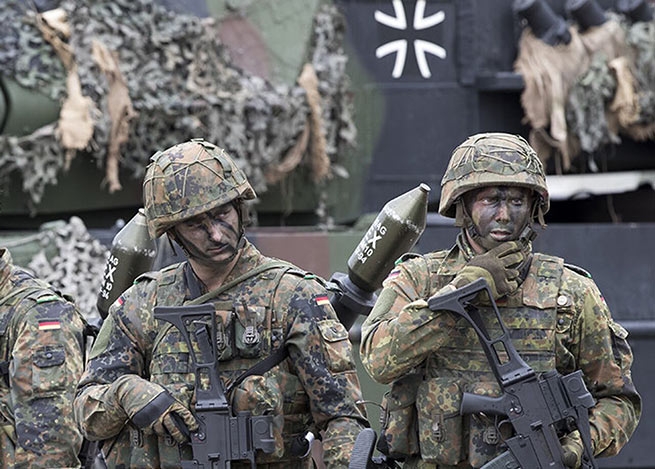 In Europe, the era of 1941 and Operation Barbarossa are being revived: in a secret report by the German headquarters, published by the magazine Spiegel, Germany “must begin immediate preparations for a conflict with Russia.”

Spiegel managed to obtain a secret report from the German Ministry of Defense, which outlines the “strategic reorientation” of the Bundeswehr on the possible likelihood of an immediate military confrontation with Russia. The report is signed by Inspector General of the German Armed Forces Gerhard Chorn, who is preparing for difficult years. The 68-page confidential document has the somewhat vague title “Operating Instructions for the Armed Forces”. Its content is very specific.

As recently as at the end of September, a German general declared that the army should prepare more effectively for a possible military conflict with Russia. “Attacks on Germany could potentially be carried out without warning and possibly with a large number of casualties,” the report says. And another point: “Undoubtedly, the ability to defend the country and NATO territory will be vital and even more important than before.”

What immediately grabs the reader’s attention is the constant repetition of the word “containment”. As any direct conflict in NATO’s eastern wing “becomes more likely again”, Germany must play a major role in Europe and make its military more powerful. In this context, according to General Chorn, “the training and operational readiness of the armed forces in a high-intensity (war) scenario is the basis of deterrence.” In other words, it is no longer enough to send specialized units to specific missions abroad, as has been the case until now. Instead, numerous military units must be kept in full combat readiness for the needs of NATO.

And it is here that the expression “turning point” appears in the confidential report, which Chancellor Scholz used after the Russian invasion of Ukraine at the extraordinary session of the Bundestag on February 27th. “War in Europe is a reality again,” as General Chorn describes more specifically in the introduction to the report. “Consequently, Germany must be prepared for the fact that in the event of a Russian attack on the eastern wing of NATO, the Bundeswehr must provide combat-ready and ready-to-action forces, and not expect support from the United States.”

The Inspector General of the German Armed Forces categorically warns that no EUnor NATO can afford to start planning and building up forces at the moment of a potential attack. Chorn also emphasizes “the paramount role that the German army is called upon to play in the eastern wing of NATO in a forced war.”

In the eastern wing of NATO, she created small commando units, a kind of first human mound, and increased military exercises several times compared to the past. However, unlike today, almost all NATO generals were confident that Russia would not seek direct confrontation with NATO, and that makes a big difference. The question of how Germany’s armed forces will develop in the coming years is the most important one for its partners. Because of its position and military importance, Germany is seen as a “leading country” and this also gives rise to certain “expectations” on the part of NATO allies, which are expressed in “operational readiness”.

Another German general put it more clearly: “If we don’t act quickly and equip our army, no other army in Europe will.”

It is worth noting that Germany’s neighbors already fear that this will lead to a revival of traditional German militarism of the 19th and 20th centuries.