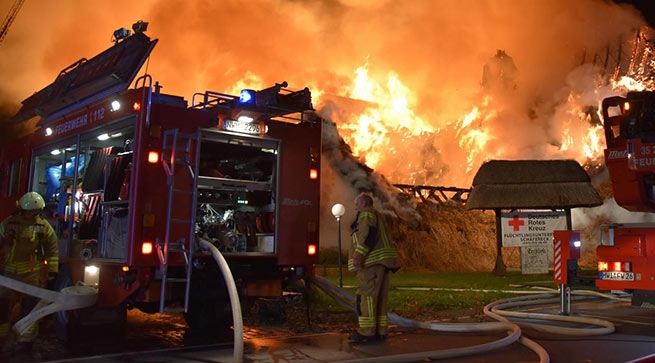 German authorities have arrested a firefighter on charges of setting fire to a hotel hosting refugees from Ukraine.

The fire, which broke out at a shelter for Ukrainian refugees in northeast Germany last month, was started by one of the firefighters who later helped put it out. The prosecutor’s office of Mecklenburg-Vorpommern announced the arrest of a 32-year-old fire chief.

A swastika painted on a Red Cross sign near a converted thatched-roof hotel in the town of Groß Strömkendorf two days before the fire has led some to speculate about political motives for the arson, which caused millions of euros in damage. None of the 17 residents of the shelter, Ukrainian refugees, was injured, reports the Guardian. Investigators said they believe the fire at the shelter was one of a series of 19 arson attempts in an area east of the port city of Wismar.

The 32-year-old, who is said to have been a member of the volunteer and professional fire services since his youth, denied the allegations and remains in detention. Like all the rescuers involved in extinguishing the fire at the shelter, the man was questioned by police a few days after the incident. Inconsistencies between his answers and those of his colleagues alerted investigators, who found witnesses proving that the man had visited four sites where other fires had taken place. In one case, according to Der Spiegel, a witness saw him arrive in a car shortly before the fire started and leave shortly after. In the weeks before, the region had also experienced an unexplained series of fires that devastated forested areas.

The fire at the Groß-Stromkendorf refugee shelter on October 19 attracted a lot of media attention in Germany and prompted some politicians to accuse each other of instigating the arson with their “careless rhetoric”. Saskia Esken, co-chair of the ruling center-left Social Democratic Party (SPD), called on the Christian Democratic Union (CDU) leader to answer questions about “mob hatred and incitement that later escalate into violence.” In a September TV interview, Conservative leader Friedrich Merz lamented what he said was a growing problem with Ukrainians allegedly engaging in “social tourism,” demanding benefits in Germany before returning to their homeland.

It is worth noting that the statement was not made from scratch. This was stated back in September by Ukrainians living in the Czech Republic and Germany, referring to residents of Western Ukraine and Transcarpathia, who rented their housing to refugees from other regions, and left for Europe, where they received benefits and housing, thus occupying a place for real refugees from the east and south of Ukraine.