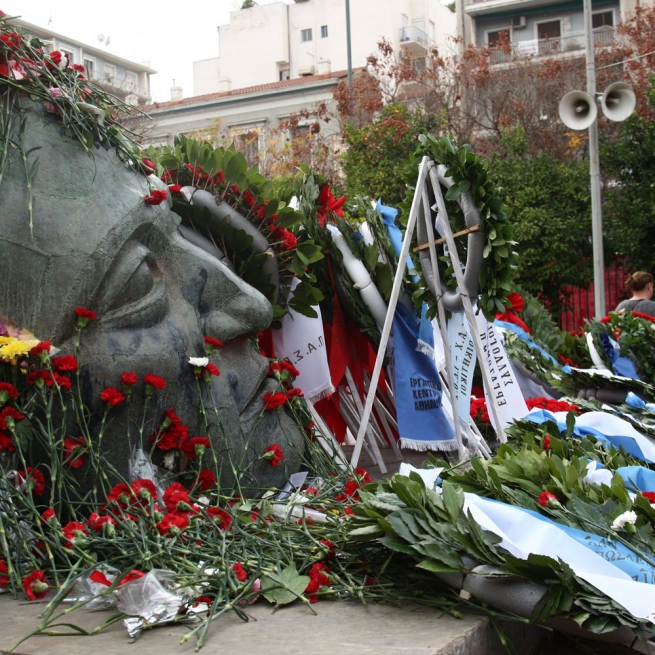 The years that separate us from this event are approaching half a century, which means that fewer and fewer people know who owns the head of the historical sculpture installed at the Polytechnic building and dedicated to the uprising of students against the junta in 1973.

The head sculpture was created by Memos Makris, a famous Greek sculptor who was born in 1913 and studied under Michalis Tombros, Epam Thompopoulos and K. Dimitriadis at the Athens School of Fine Arts.

Memo Makris’s political activities began in the 1930s, and after a period of occupation during which he developed an active resistance activity, he continued his studies in Paris. In 1950, he was expelled from France because of his leftist political convictions and found political asylum in Hungary, where he was very active, as a result of which he established himself as one of the sculptors who expressed the official aesthetics of the state with compositions in the spirit of socialist realism.

In 1964, he was stripped of his Greek citizenship, which he regained in 1975 after the restoration of democracy in Greece. In 1978, the National Gallery hosted his first retrospective exhibition in Greece. As for the sculpture he created, although it is not associated with the uprising at the Polytechnic, but with the Greek historian Nikos Svoronos, nevertheless, it has become its symbol.

Born in 1911, Svoronos studied at the Philosophical University of Athens and then joined the EAM and EL.AS, where he served in the Vironos-Caesariani area. In December 1945, Svoronos fled to France, where he met Memos Makris. In 1955, he was also stripped of his Greek citizenship, and in 1961 he received French citizenship. Returning to Greece after the fall of the dictatorship, Svoronos taught at the Universities of Thessaloniki and Crete, was a member of the Steering Committee of the University of Crete and Research Director of the National Research Foundation, and was awarded an honorary doctorate from the Universities of Athens (1976) and Thessaloniki (1977).

The sculpture depicting Nikos Svoronos was installed in the building of the Polytechnic Institute, thanks to the actions of the then rector and member of the KKE, Giorgos Buduris, who was a friend of Memos Makris.