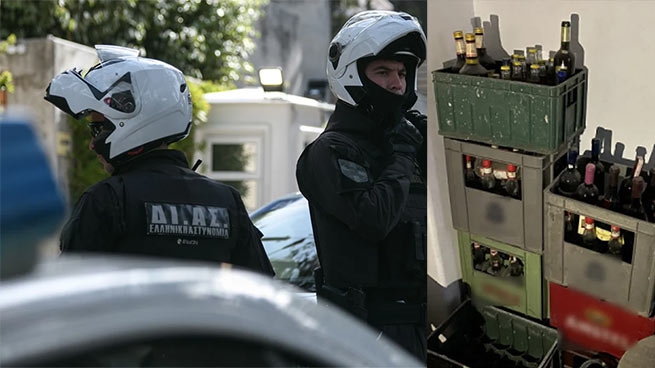 During a police operation on Tuesday morning in Exarchia, bottles of alcoholic beverages, stones and other building materials were found.

According to ΕΛ.ΑΣ., the operation was carried out in the early morning of 15 November in the context of the proper use of information data by the State Security Sub-Directorate of the Attica Security Directorate.

During a search conducted in one of the abandoned houses known to the police in Exarchia, found and seized 100 bottles of liquor in boxes, stones and other building materials. Most likely from these bottles they planned to make Molotov cocktails. However, since no gasoline or other combustible materials were found, the police would have no evidence to charge.

Police say they detained (preemptively) 17 people on Tuesday and Wednesday who authorities believe are members of anarchist groups who, according to police, were planning to riot on Polytechnio Day.

More than 5,500 police officers were sent to the streets of Athens to maintain order. These measures involve 5 armored water cannons, 2 helicopters and several drones.

Read more about the Polytechnic Day in the material November 17 – “Polytechnio Day” in Greece is celebrated especially.