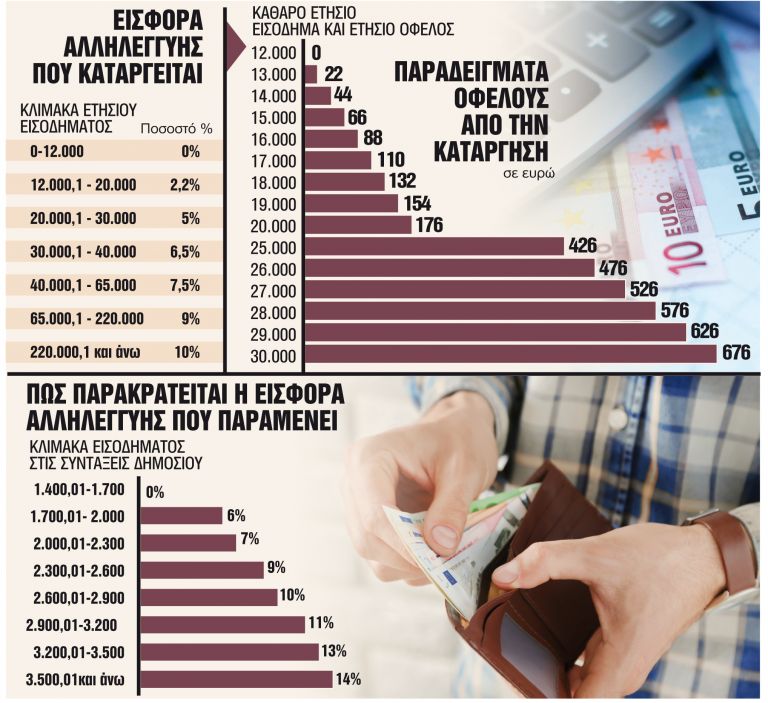 Greek pensioners and civil servants will see a monthly increase in pensions from 5 to 56 euros from the abolition of the solidarity fee (εισφοράς αλληλεγγύης) at the end of December.

The exemption for civil servants and pensioners (with an annual income above 12,000 euros) will be automatically reflected in their monthly earnings, since the solidarity levy is deducted from salaries and pensions along with income tax. The cancellation will result in an increase in their wages, which start at €22 and go up to €676 per year for those with high incomes. In fact, those whose monthly earnings exceed 1,000 euros will generally be exempt from the fee. However, only one of the two solidarity pension contributions will be canceled from 1 January 2023. The following two contributions are specified in the pension notices:

The cancellation concerns the second case (tax), which is also the smallest amount of money compared to the first. Pensioners can find out (and print out) information from the ΕΦΚΑ website, which amount will be abolished.

The measure to abolish the solidarity tax, according to the Ministry of Finance, concerns approximately 500,000 taxpayers. Solidarity gathering in the private sector has been suspended since 2021. The Special Solidarity Contribution for Pensioners (ΕΑΣ), introduced on August 1, 2010, will be paid in the usual way (to the account of ΑΚΑΓΕ) to cover the deficit of the main pension units of the fund. The mentioned contribution is levied on incomes above 1400 euros in stages, and an additional contribution of 3% to 10% is paid by those pensioners who have an additional allowance of 300 euros or more. It is noted that the State Council considered the pension solidarity contribution to be constitutionally permissible, and the Accounts Chamber – unconstitutional for 2017-2018 and constitutionally permissible in the future.