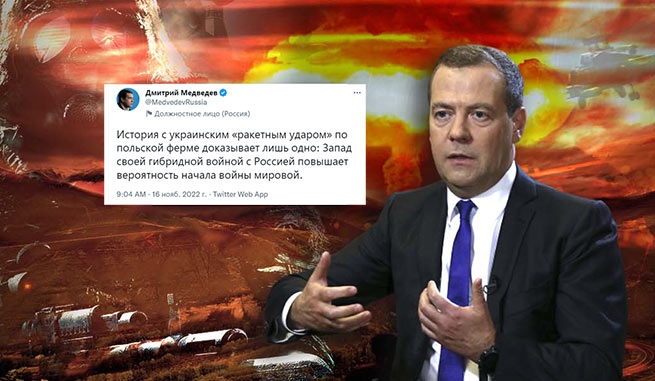 Former Russian President Dmitry Medvedev made another speech, saying today that a missile attack on Polish soil shows that the West is approaching a new world war.

The story of the Ukrainian “missile strike” on a Polish farm proves only one thing: the West, by its hybrid war with Russia, increases the likelihood of a world war.

History since “Russian” missile strike” on a Polish farm proves only one thing: the continuation of the hybrid war between Russia and the collective West increases the likelihood of a world war. In the West, there is now also an opinion that V. Zelensky has become a dangerous burden for global security, and the Polish incident highlighted this danger.

However, Western economies are in a very difficult position due to the war in Ukraine and the imposition of sanctions against Russia, as can be seen from the joint statement of the G20, most of which are Western countries. The war in Ukraine, the statement stressed, “is causing enormous human suffering and exacerbating existing weaknesses in the global economy – limiting growth, increasing inflation, disrupting supply chains, increasing energy and food insecurity, and risks to financial stability.”

In one paragraph, the Westerners summarized the reason why they want an immediate cessation of hostilities and V. Zelensky’s entry into negotiations with Russia. The United States provoked a Russian-Ukrainian war in the hope that in doing so they would destroy the Russian economy, and with it the Russian military, which ultimately did not happen because they underestimated the real economy and instead overestimated the value of the financial economy, which , if there is no energy, raw materials and food to buy, turns money into a pile of cut paper, and bloated stocks into worthless zeros and ones.

The G20 concluded that “the use or threat of use of nuclear weapons is unacceptable. Peaceful conflict resolution, crisis management efforts, and diplomacy and dialogue are vital. There should be no war in our time.” The need to comply with international law is emphasized and the initiative to export grain through the Black Sea is welcomed.

The statement also said that member central banks will continue to scale the pace of monetary tightening as appropriate. G20 members also reaffirm their commitment to avoid excessive exchange rate volatility, while recognizing that “many currencies have moved significantly” this year.