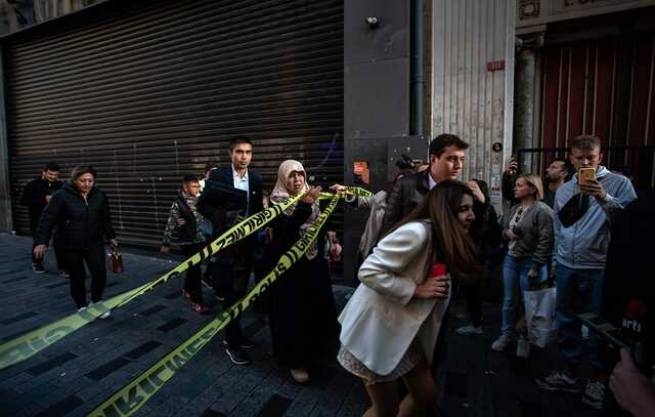 At the initiative of the Minister of Health of Greece, Thanos Pleuris, a Greek woman injured in a terrorist attack in the center of Istanbul will be taken to Athens.

According to the Greek Ministry of Health, Mr. Plevris contacted the lawyer of the family of the injured Greek tourist, and, in agreement with the consulate, the woman wounded by glass fragments will be transferred to Greece. Earlier, the Greek Ministry of Foreign Affairs said, citing CNN Greece:

“According to the latest information from the Turkish authorities, among the victims of yesterday’s explosion in Istanbul there is a Greek woman who was slightly injured by a piece of glass and is out of danger in the city hospital. The consular authorities are providing all possible assistance.”

A 39-year-old woman from Greece writes newsbeast.gr, treated in an Istanbul hospital, spoke about the tragic moments she experienced during the explosion in an exclusive interview ΑΝΤ1. According to her, she was lucky because she was only a few meters from the epicenter:

I was on Istiklal, walking on the right side of the street, when there was an explosion three shops down. A moment of shock. There is a white flash in the air, an air wave blows you in the back. I don’t know how to describe it. Your life stops. So far, we’ve seen it on TV. But thank God, I am healthy, able to work, I have nothing but an injured leg, doctors should help me. I hope to forget this sad event. I saw several dead bodies. Corpses? Injuries? Fast, fleeting. At this moment, you look and understand that there was an explosion. After this shock, you automatically understand that this is an explosion, terrorists. You look around and see that there is chaos, war. Very bad time. People are running in panic. I lay on the ground. Suddenly I saw a lot of blood flowing from my leg. I was scared. If you haven’t experienced it, you won’t be able to understand that kind of fear. There were people in a much worse condition, some died. I just thank God that I am alive, I am very lucky. I experienced shock, horror, and some people helped me, took me to the store, closed the blinds. People were crying, panic, voices, babies, parents. Then we started waiting for the ambulance. I was taken further, and my leg was bleeding so badly that I feared something worse had happened. Men, women from the store helped me, but I was terrified. I am very sorry for the people who died, God rest their souls and let me once again thank God that I am alive.

As our publication previously reported, on the busy pedestrian Istiklal Street in the center of Istanbul on Sunday afternoon there was a powerful explosion. It claimed the lives of at least six people. Two of the 81 injured are in serious condition. On the TRT Haber TV channel, the head of the Turkish Interior Ministry said: “The person who left the bomb detained. In the near future, those who caused us this pain, we will give pain many times greater.