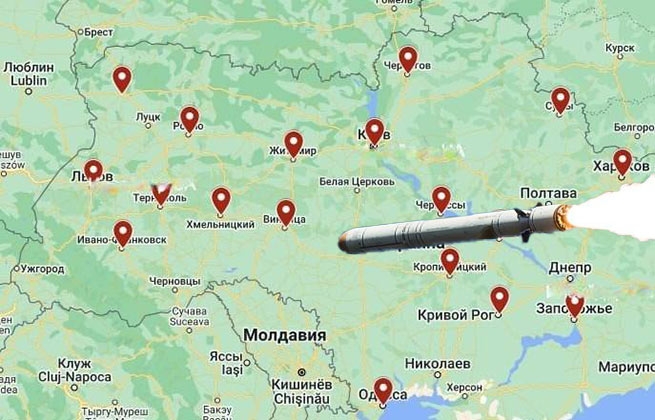 Today, at least two explosions thundered in Kyiv, smoke rose over the city, a Reuters correspondent in the Ukrainian capital reports. All regional centers of Ukraine were subjected to missile attacks. Critical damage was done to the country’s infrastructure, authorities said.

The explosions followed an airstrike warning against Ukraine, hours after President Volodymyr Zelensky spoke via video link with G20 leaders gathered in Bali. It is possible that today was the largest single missile attack on Ukraine since the beginning of the Russian invasion. The scale of its consequences will become clear later. But the authorities are already confirming that critical damage has been done to the country’s energy infrastructure.

Explosions were heard in Kyiv, and smoke could be seen rising above the city. The air is filled with explosions.

Sumy, Odesa, and Kyiv are all under air defense. pic.twitter.com/TSFlbwEVmz

Russia responds to @ZelenskyyUa‘s powerful speech at #G20 with a new missile attack. Does anyone seriously think that the Kremlin really wants peace? It wants obedience. But at the end of the day, terrorists always lose.

Russia responded to Zelensky’s powerful performance at the G20 with a new missile strike. Does anyone think the Kremlin really wants peace? He wants submission. But in the end the terrorists always lose.” Andriy Yermak, head of the presidential service, wrote on Twitter.

Air raid alert is still on, everyone advised to stay in shelters.

Anton Gerashchenko writes:In Kyiv, two houses were damaged. The air raid alert is still active and everyone is advised to stay in cover.” Later, there were reports that 1 person died from the wreckage of a downed missile air defense system.

Kharkiv, Lvov and Odessa were also subjected to shelling, where there were explosions from rocket hits, and local authorities are asking residents to stay in shelters.

The mayor of Lviv speaks about a very difficult situation in the city: 80% without electricity, the heat supply has been stopped, electric transport is not running.