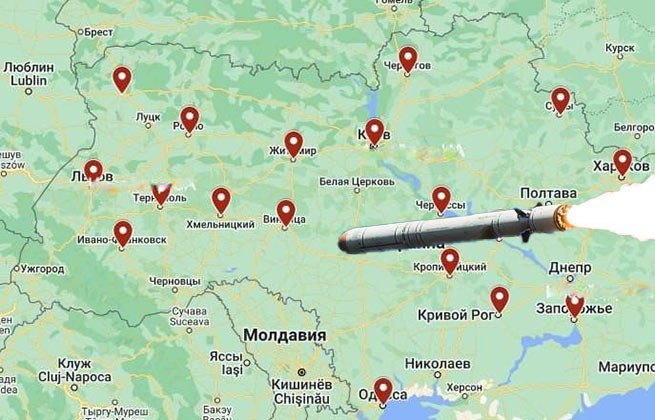 According to Polish media reports, two rockets (?) hit grain dryers on a farm in Przewodow, in the Lublin Voivodeship, 65 km from the border with Ukraine. The impact killed two people.

Polish Prime Minister Mateusz Morawiecki urgently convened the Council of Ministers Committee on National Security and Defense. This was announced by the press secretary of the Polish government Piotr Muller, writes Polsat News.

It is reported that the Polish Air Force took off fighter jets from the airfield in Tomaszow Lubelski. The army and the prosecutor’s office arrived at the farm, where the rockets had previously fallen, writes Visegrad.

The Polish Air Force has scrambled fighter jets from the airport in Tomaszów Lubelski.

The Army and Prosecutor’s Office have arrived to the farm.

The reports about the missile attack are unofficial, but come from Radio Zet, a renowned Radio Station.https://t.co/SlEkJU1aUD

Polish government spokesman Piotr Muller confirmed that a meeting of the National Security and Defense Committee was convened in the country.

“Due to the emergency situation, Prime Minister Morawiecki, in consultation with President Duda, has ordered a meeting of the National Security and Defense Committee. The information that will be presented at the committee will later, if possible, be brought to the attention of the public to the maximum extent possible. I urge you not to publish unconfirmed information until then.“, he noted.

Pentagon spokesman Patrick Ryder said during a briefing that he could not confirm that the missiles or their parts that fell on Polish territory were Russian.

When asked about the prospect of applying Article 5 of the NATO charter, he replied: “We will not speculate without facts yet.”

Radio Lublin reports another version: the incident in Przevodov occurred at about 15.40 on the reloading scales, where tractors with loads drive in. This information of the radio station was confirmed by the local police. According to preliminary findings, the tractor that drove onto the scale suddenly exploded. Radio also reports the death of two people.

The US State Department said it was “taking time” to deal with the situation in Poland. The department said that Washington, together with Warsaw, is now collecting data on the incident. They say that the United States is ready to “stand side by side” with NATO allies, but so far they do not want to discuss hypothetical scenarios and do not seek to escalate the situation.

Further steps will be taken based on the collection of additional information.

Zelenskiy blamed the incident on Russia and urged NATO to respond.

There will be no response from NATO to the shelling of Polish territory, Aleksey Arestovich, adviser to the President’s Office, believes. The pause announced at the Pentagon regarding the fall of missiles in Poland is needed in order to “not to raise the degree.” “And what phenomenon? An attack on the RF Armed Forces? – I don’t believe it. A no-fly zone over Ukraine? – I don’t believe it. A difficult political decision and I have no doubt that they will be forgiven for this object“, – he said.

Ministry of Defense of the Russian Federation called “a provocation to escalate” statements from Poland about the fall of Russian missiles: “No strikes were made against targets near the Ukrainian-Polish state border by Russian means of destruction,” the military department quotes TASS.

“Statements by the Polish media and officials about the alleged fall of” Russian “missiles in the area of ​​​​the settlement of Przewoduv is a deliberate provocation in order to escalate the situation. No strikes were made against targets near the Ukrainian-Polish state border by Russian means of destruction,” the ministry said. .

As emphasized in the Russian Ministry of Defense, the photographs of the wreckage published by the Polish media from the scene of the incident have nothing to do with Russian weapons.

Russia has dealt a massive blow to Ukraine
On November 15, Russia carried out a massive three-wave missile launch against Ukrainian cities, targeting critical infrastructure. In Kyiv, missiles shot down by local air defenses fell on high-rise buildings in the Pechersky district, 1 person died.

Rocket strikes were carried out on Lvov. In the city, according to the mayor of Sadovoy, the situation in the city is very difficult, 80% of the electricity is turned off.

According to NPC Ukrenergo, strikes were recorded on energy facilities in all regions of the country. The most difficult situation is in the central and northern regions. Power engineers introduced emergency power outages. De-energized at least half of Kyiv, said Mayor Vitali Klitschko.

According to the Air Force Command, Ukrainian air defense forces today shot down 73 of more than 90 enemy cruise missiles, as well as 10 Geran-2 drones.