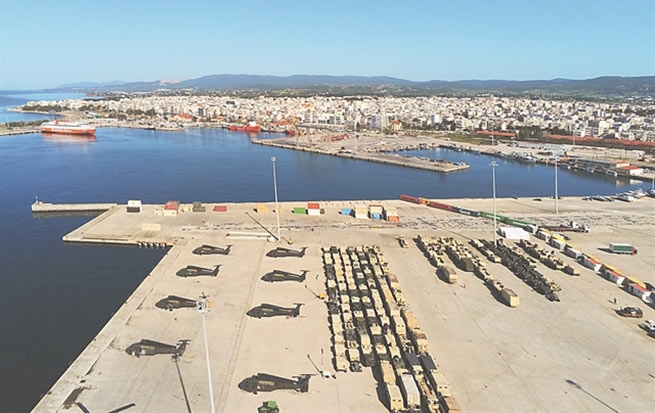 The geostrategic and geopolitical value of the border town of Alexandroupoli to Greece has skyrocketed since the start of the Russian invasion of Ukraine. What is the government planning after the cancellation of the privatization process.

Alexandroupoli is no longer for sale. This statement was made by Kyriakos Mitsotakis, who, referring to the great strategic, geopolitical and energy importance of the city of Alexandroupoli for the country, said that for this it is necessary that it “remain in the ownership of the Greek state”, in order to develop the port and fully use its full potential. “At this stage, we see no reason to sell the port of Alexandroupolis to a foreign investor,” he announced, in fact, the cancellation of the tender. With the Russian invasion of Ukraine and the events that began, the importance of the “capital of Alexandroupolis” increased even more. Especially for the USA. After the role of Alexandroupoli as a strategic military base for the US was highlighted.

The signing by Nikos Dendias and his American counterpart Anthony Blinken of the latest five-year extension of the Mutual Defense Cooperation Agreement (MDCA), which, if not terminated, will remain in force indefinitely, was another step in the beginning of the transformation of Alexandroupolis into a “new Court”.

Pivot with the privatization of the port of Alexandroupoli

Back in July of this year, The Economist pointed to concerns, at least in the US, about the progress of port privatization, noting that “The small Greek town of Alexandroupolis, on the Aegean Sea, 15 kilometers from the Turkish border, has become a thriving city in recent years, no longer dependent on selling souvenirs to tourists. For this, the city can thank Vladimir Putin, for his invasion of Ukraine, which caused a boom in activity in its port. also its importance in reducing the dependence of the countries of the region on Russian gas. “However, a Greek company with Russian connections wants to buy it. Circumstances make port privatization delicate. It’s a good time to cancel this deal,” the Economist reports, foreshadowing a substantive development.

The tender was formally canceled on Thursday by a related TAIPED announcement, which noted that initiatives would be taken immediately in cooperation with the ministries of finance and shipping to further develop the Alexandroupoli Port Authority. At the same time, the direction is indicated as the most suitable for the United States, according to sources familiar with the development of events, emphasizing that the role and importance that the port has acquired did not allow “experiments” with uncontrolled ownership. At the same time, information that was not confirmed by any of the official parties that will participate in the tender, nor by the government, but which has been released, indicates doubts about the partners of the schemes claiming the port, even about the possibility of reselling it.

Reason for canceling the tender
In any case, government sources emphasize in every tone that the reason for the decision was the one disclosed by the prime minister, noting that it is obvious that under the circumstances and given the developments in the war in Ukraine, no experiments were allowed. And above all, we must not allow the slightest risk in relation to the port of Alexandroupolis, which will entail any variant of privatization. And this can open at least the slightest, but a loophole for Moscow or any other undesirable power (probably meaning China), which will jeopardize US interests in the region.

After all, it is known that after Russia’s invasion of Ukraine, Alexandroupoli became an alternative to the Bosphorus Strait, from where especially important American forces were deployed to the eastern wing of NATO.

Plans for expansion and deepening
In addition, as it has already become known, the plans include the expansion and deepening of the port so that large ships of the American fleet, which today can only be serviced in Suda, can moor in it. However, it is Alexandroupoli’s proximity to the Black Sea that enhances its importance, based on the plan, which includes the Balkan infrastructure network, which the US is working on, wanting to create an arc from Crete to Thrace. It will be able to function as a single space and will strengthen American forces in the region. And it shows the intent that led to the pressure from Washington to turn the MDCA into a perpetual – essentially – agreement that would allow them to plan for the long term, without backtracking.

A region for which ensuring stability is absolutely critical. Moreover, Alexandroupoli acquires additional value for NATO, as its location is described as ideal, even if only a minimal percentage of its potential is currently being used.

US plans for Alexandroupoli caused outrage in Ankara. With Turkey constantly criticizing Greek-American strategic cooperation, the US has effectively shifted its priorities to Greece through moves that have made the port of Alexandroupoli one of the most important bases and hubs in the region. For Erdogan, the American bases in Alexandroupolis are an irritant. And although, according to the United States, they are directed against Russia, Ankara understands that this changes the balance in relations between Greece and the United States with Turkey.

Its energy capabilities and plans are, after all, what was dictated by the agreement between Erdogan and Putin, the announcement of the construction of a gas distribution center in Eastern Thrace, as a counterbalance to Alexandroupoli.

After the cancellation of the tender, it is expected that a number of new initiatives regarding the development of various uses of the port of Alexandroupolis will be submitted for consideration. Given the upcoming developments and the next steps to be taken, it is essential to plan them down to the smallest detail in order to avoid inconsistencies that could prove dangerous.

PS Economic well-being for Alexandroupoli is, of course, great. True, it is not known what this prosperity will be based on, because the United States does not pay anything to Greece for this base, and the sailors’ periodic trips to local restaurants and taverns will not cover the losses from idle hotels. And most importantly, do the inhabitants of the city realize the factor that now they and their city have become the target of Russian nuclear missiles?