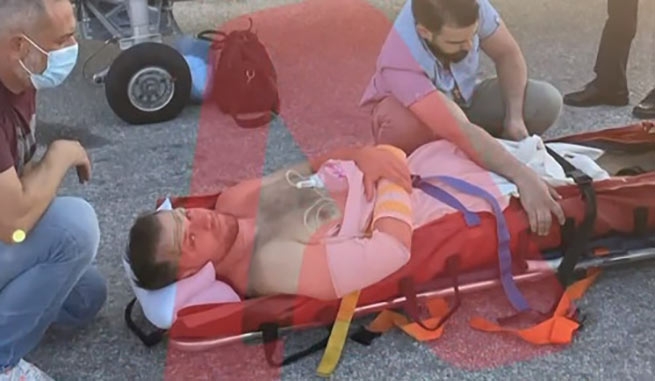 The 33-year-old American businessman came to Mykonos for a summer vacation. In the beginning everything went fine. But what happened next was a dramatic event for himself and his family.

According to the businessman, he parked his car where the employees of the famous Beach Bar indicated, and when he returned to the car, he found himself … in a well eight meters deep.

As the man claims in his complaint, he was severely injured and remained trapped for some time until an ambulance and fire brigade arrived in the early morning to remove him and provide first aid. The victim claims that he was in the well all night, and when he was removed, he was airlifted to a private hospital in Athens due to the severity of his condition.

“I parked in this place at the direction of the bar staff, who indicated where to put all the cars, they directed everyone exclusively to this parking lot. When I went to pick up the car, we were walking in the dark, and I fell into an eight-meter well, which was one meter from my car, ”the man describes what happened. Now the American has declared that he is crippled and needs round-the-clock care for three months. He is suing the company, demanding compensation in the amount of hundreds of thousands of euros.

The businessman’s lawyer Stelios Agapinos says: “He was very badly injured, he has multiple fractures all over his body. Only age and good physical condition saved him from disability.” In his statements to Mega, the lawyer added that “the only reason why he did not die is that, as the rescuers write, a mattress fell into the well earlier, and this person accidentally fell on it.”

According to TV channel “Tlive”, to which the American businessman sold the rights to cover what is happening, the lawsuit was filed against the company that operates the parking lot. The receipt the businessman received does not mention the name of the bar, which claims through its lawyer that it has nothing to do with this parking lot and does not oblige its customers to leave their cars there.