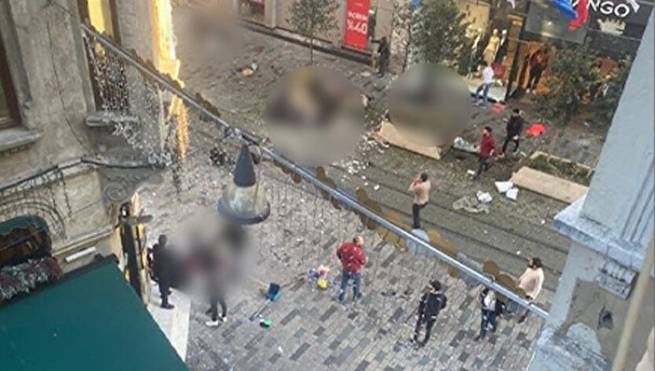 Less than 24 hours after the attack in Istanbul, the Turkish authorities managed not only to detain the alleged terrorist along with other suspects, but also to involve Greece in the case.

Footage emerged on Monday of Turkish security forces catching a suspect believed to be behind the explosion on Istiklal Avenue in Istanbul. According to the authorities, the terrorist is a 23-year-old Syrian citizen. Istanbul police teams reportedly identified the suspected woman from her appearance, as identified by images taken by surveillance cameras near the blast site, and as she fled the scene.

The suspect was detained during a nighttime raid by an anti-terrorist group at a shelter located in the Küçükçekmece area, west of the attack site, after CCTV footage showed her detonating a bomb, killing 6 people and injuring 81.

Turkish Interior Minister Suleyman Soylu also said that the police have a phone/audio recording that indicates that the PKK ordered her to be killed to prevent her capture. “The suspect in the Istanbul attack would have fled to Greece today if she had not been caught,” Soylu said on Monday morning, finding in the deaths of six people an opportunity to attack Greece and, in fact, echo Turkey’s repeated claims that Lavrio (a city in northern Attica) has camps where PKK terrorists are trained.

According to the state news agency “Anadolu”, Syrian suspect Ahlam Albasir has already admitted that she acted on the side of the Kurdish PKK and was also trained by this group based in Greece.

It is reported that in the course of police operations carried out at 21 addresses after checking 1200 video recordings from cameras, 46 suspects in the attack on Istiklal Avenue were detained. Istanbul Governor Ali Yerlikaya tweeted that 50 injured people have been discharged from hospitals, 31 people are still under medical supervision. Two of the five wounded who were placed in intensive care are in serious condition, the official said.

Except Greece, Turkey blames US for attackas a country supporting the PKK. “According to our estimates, the order to carry out the attack came from Kobani, and the perpetrator of the attack came from Afrin,” Soylu said. Kobani and Afrin are cities in northern Syria where Kurds are active. The Turkish Interior Ministry concluded that the Kurdistan Workers’ Party (PKK) and the People’s Self-Defense Forces (SNS), which are banned in Turkey, were involved in the attack.

powerful explosion took place on the afternoon of Sunday, November 13 on the busy and touristy Istiklal Street in Istanbul. Six people were killed, according to official figures. 81 injured.