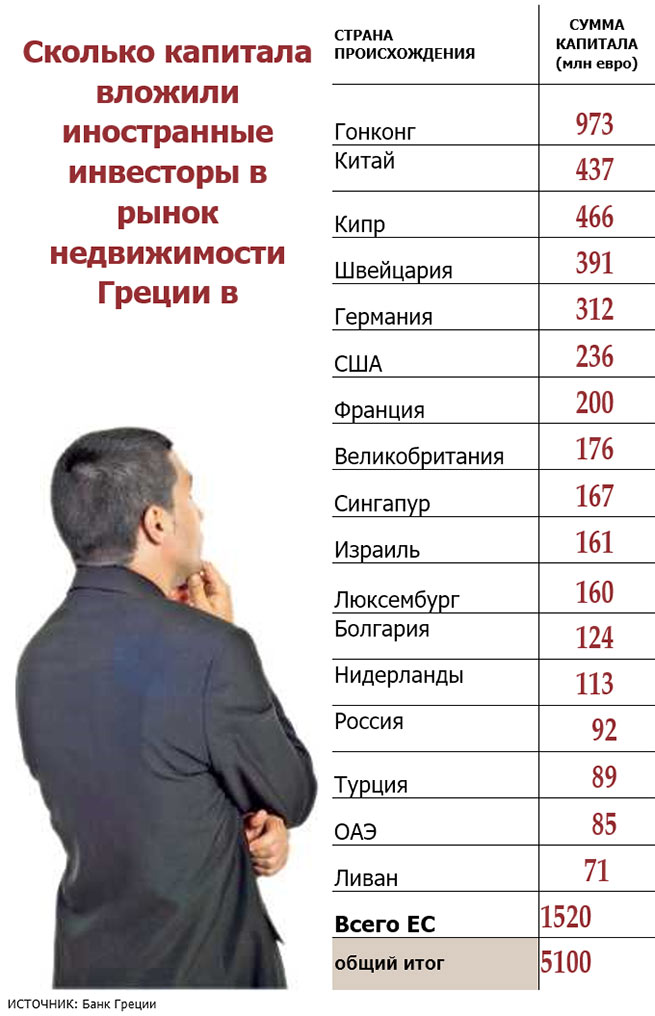 Over €5 billion in foreign funds poured into the Greek economy to buy property between 2017 and 2021, according to Bank of Greece (BoG) data collected by domestic banks.

If not for the pandemic that stopped this “wave”, this amount would have been much higher. However, according to the Bank of Greece, in the period 2017-2021 “only” 1.85 billion euros (1.52 billion euros within EU) came from countries within the EU compared to €3.27 billion from outside the EU, showing the impact of the program “golden visa”. It started in mid-2014 but really started to pay off in 2017, mainly due to the low prices prevailing in the Greek market and the growing popularity of short-term rentals. Recall that it is currently being revised, and the main planned change is the doubling of the minimum investment amount for obtaining a residence permit from 250,000 to 500,000 euros.

This pattern is also reflected in individual countries. The share of funds of Chinese origin is dominant and reached 1.2 billion euros between 2017 and 2021, with inflows of 437 million euros directly from China and 973 million euros from Hong Kong.

This development can be explained by the introduction of capital controls in China in recent years, which, for example, in 2020, due to the pandemic, reduced capital inflows from China to only 23 million euros compared to 137 million euros from Hong Kong. Another €167 million came from Singapore, a large part of which is believed to be linked to Chinese investors, as the figure was only €1 million in 2017 and rose to €63 million in 2019.

Chinese dominance in real estate markets among foreigners – for the 5-year period 2017-2021. a total of 5 billion euros of foreign capital flowed into the country.

Another 391 million euros came from Switzerland, which is known to have bank accounts for investors of all nationalities (perhaps even Greek), and British buyers spent 176 million euros on property in Greece, perhaps less than one would expect. based on the number of tourists annually visiting popular tourist destinations in the country.

Similarly, Israeli investors are in 10th place with 161 million euros in the Greek real estate market, focusing on buying old apartments or even entire blocks of flats to refurbish them and then operate them through short or long term rentals. Investment activity from Bulgaria also deserves attention, as 125 million euros were invested between 2017 and 2021.

The above figures are also confirmed by the demand recorded by brokers and online advertising platforms such as Spitogatos.gr. A few weeks ago, Mr. Dimitris Melahroninos, CEO of this ad network, presented a study showing that 15% of search queries are from foreign potential buyers, with Germans being the largest group by a wide margin. “These are both German and Greek expatriates who are looking for property all over the country, but mainly in Thessaloniki and Chalkidiki, and their available budget averages 170,000 euros,” Melahronos said.

Next come US buyers, also with significant expatriate interest, who also have the highest budget of €350,000 for properties averaging 125 sqm. They prefer to live in the Cyclades and in the southern suburbs of Attica. Demand from France is also showing strong and steady growth, with a focus on the Cyclades, especially the island of Paros and, secondarily, the center of Athens.