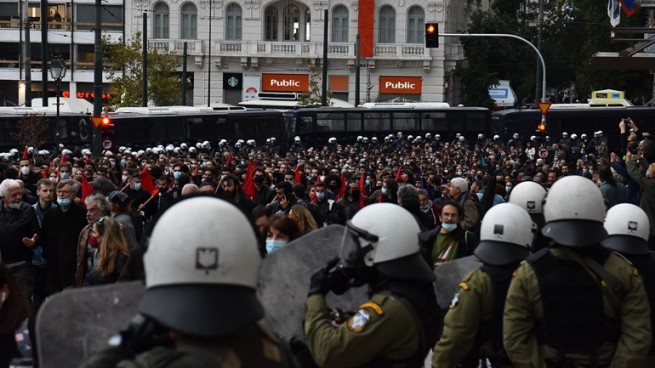 Greek police prepare to protect participants in protest marches and demonstrations marking the anniversary Polytechnic. For this, 5,500 police officers, armored water cannons and special vehicles were mobilized to destroy the barricades.

According to information APE from sources EL.AS., police forces will be reinforced by detachments from the regions, and the “safety net” will be extended to all of Athens on the eve of the anniversary, on Wednesday 16 November.

Special attention will be paid to EL.AS. guarding university institutions, the US embassy and government buildings. At the same time, plainclothes police officers will be at key points throughout the wider Athens city center while preventive checks are being carried out. From the air, drones and a helicopter will constantly provide images for the Greek army operations center, while the roofs of residential buildings will also be monitored by special police forces and anti-terrorist units, especially in the Exarchia area, from where in the past some people threw various objects at the police. Thorough checks will be carried out in places where there are signs or information that “military equipment” may have been hidden in some of them. Special armored vehicles with water cannons will be brought to the streets of the Greek capital, ready to intervene if necessary.

“Let’s peacefully celebrate the anniversary of the Polytechnic University. Undoubtedly, this is the week when the entire Greek people, all Greeks, all Greek women, regardless of age and position, honor the uprising of the Polytechnic. We honor the student and youth uprising in 1973 against the tyrannical junta regime. We all allow ourselves to think and reflect on those events about that rebellion for freedom and democracy. Because some people gave their lives or fought very important battles so that the most open, strongest, most prosperous Hellenic Republic of all time could exist for half a century.

Therefore, we invite everyone to help make the holiday absolutely peaceful, and what remains are messages and ideas. The Greek police and the Ministry of Citizens’ Protection, in close cooperation with the authorities and the organizers of these actions, have taken the necessary measures to protect the safety of the people who will participate in the demonstrations and the people who are in the rest of the social and economic life of the city. And, of course, people’s feelings. I ask the organizers, all those who participate, to contribute with responsibility to the march, demonstration and all events so that the celebration is absolutely peaceful.“.

PS Judging by the means mentioned above, the authorities will spare nothing to protect … the demonstrators: water cannons, batons and tear gas for every taste and choice.