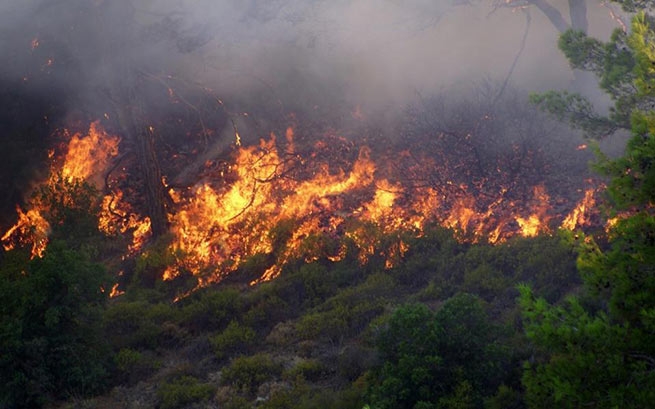 A devastating fire that has destroyed thousands of hectares of pristine forests and shrubs on Greece’s northern border with Bulgaria is now in its 20th day. Authorities are optimistic about bringing the fire under control before it causes further destruction.

The fire started on October 22 on Mount Papikio in the Rhodope region and has already burned about 1,200 hectares on the Greek side of the border and another 300 hectares on the Bulgarian side, Lifo reported on Thursday. It feeds mainly on fallen leaves, and extinguishing it proves to be a difficult task due to the lack of roads in the forest for fire trucks to drive through. There is also a shortage of firefighting aircraft as Greece’s firefighting aircraft have been largely put on maintenance as the fire season ends, Euronews reported last week.

The rocky terrain, with steep cliffs and deep ravines, has also proved to be an obstacle preventing firefighters and the army deployed to fight the blaze from reaching the fire on foot or by air, civil protection authorities told Athens-Macedonian News on Monday. “You can appreciate how dangerous it is for aircraft when they suddenly need to take off from 500-600 meters to 1100-1200 meters,” said Secretary General for Civil Protection Vassilis Papageorgiou. “Most of the perimeter has been secured, but there is still a steep slope.”

The deputy regional governor in charge of fire services in Eastern Macedonia and Thrace, Konstantinos Koukouras, was even more optimistic on Wednesday on television. “The situation is much, much better. We are close to containing it completely,” he told Star TV.

Mount Papikio, designated by the European Union as a major natural site, is home to a significant population of vultures, eagles, black storks and wolves.

PS Judging by the “victorious reports” of firefighters and the duration of the fire, they simply wait until it rains and the fire goes out by itself. Nobody cares…