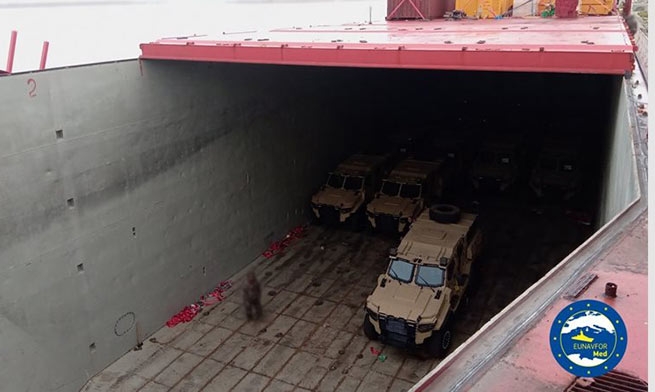 Operation IRINI’s mechanism enabled the hijacking of a vessel with off-road vehicles modified for military use in Libya, which is under a UN arms embargo.

The Dutch-flagged merchant ship MV MEERDIJK was sent to the port of Almyros near Volos in Central Greece, according to local media on Thursday 10 November. The ship left the United Arab Emirates. The registered destination is the United Kingdom, according to marinetraffic.com, but in fact it was bound for Libya.

Who owns the cargo MV MEERDIJK

The MV MEERDIJK cargo seized in Operation IRINI came from the United Arab Emirates and was likely destined for Khalifa Haftar, given his previous stops, which likely show vehicles being loaded in an Arab country. In addition, the vehicles, judging by the photographs, are BATT UMG (lt-79), used by Khalifa Haftar in the military operations of the LNA.

Instead of putting pressure on Turkey, which simply refuses to submit to international forces (2020 french ship incident) in the management of its ships, Greece “shoots itself in the foot”, depriving Khalifa Haftar of useful military equipment.

On October 11, during the operation EUNAVFOR MED IRINI, an inspection of the merchant vessel MV MEERDIJK was carried out off the coast of Libya. The ship was found to be transporting vehicles modified for military use to Libya, allegedly in violation of a UN arms embargo. This is the second IRINI cargo seizure under UN Security Council Resolution (UNSCR) 2292 (2016) in less than three months. One of the European military vessels operating in the central Mediterranean Sea as part of Operation IRINI found the vessel on its way to Libya.

At the request of Operation IRINI, in accordance with UNSCR 2292, the Netherlands, as the flag state of the vessel, immediately agreed to the inspection, and on October 11, boarding party to check the nature of these vehicles. She found dozens of military vehicles placed in possible violation of the UN arms embargo on Libya. In accordance with the mandate of the operation, the vehicles are confiscated and the vessel is sent to one of the European ports for further inspection. After being inspected by a UN team of experts, the vehicles were unloaded and placed ashore.

STORY. Since March 2020, Operation IRINI has conducted 25 maritime inspections, in accordance with all relevant UN Security Council resolutions authorizing the search, diversion and seizure of a cargo of weapons and related materials when found on board a merchant ship bound for Libya. All UN members are called upon to cooperate with such inspections. Since the beginning of the operation, only one country has refused its consent nine times. Operation IRINI continues to effectively and impartially support the implementation of the UN arms embargo on Libya.