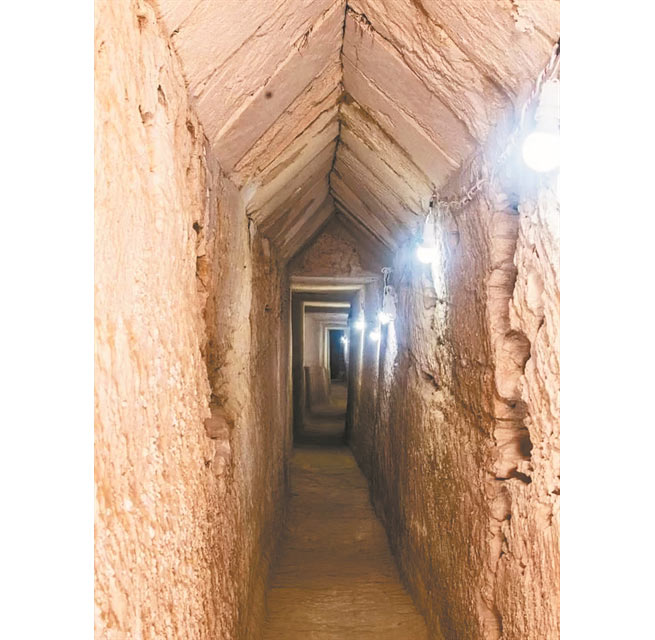 An ancient tunnel discovered under the Egyptian temple of Osiris in Alexandria in Egypt may lead to Cleopatra’s tomb.

The new information has been released by a team of archaeologists who have been digging for two decades around a sacred site in Taposiri Great, an ancient Egyptian city near modern-day Aboukir, looking for the burial site of Egypt’s last Ptolemaic queen and her lover Mark Antony.

The tunnel, 1400 m long and 1.8 m high, discovered at a depth of 13 m, is described by scientists as a great engineering achievement and compared with the Evpalinsk trench of the 6th century. for example, on Samos: a tunnel created by the megarite architect Evpalinus by connecting two tunnels that he dug simultaneously from both sides of the mountain so that they meet in the middle. Part of the Egyptian tunnel is under water, possibly due to the intense seismic activity that took place during the first millennium AD in the area, as the springs recorded about 23 earthquakes from 320 to 1303.

In addition to the tunnel, in the temple of Taposiris Magna, during archaeological excavations, two alabaster statues of the Ptolemaic era were discovered, one of which depicts a sphinx, as well as earthenware vessels. “This is the perfect location for the tomb of Cleopatra,” archaeologist Kathleen Martinez of St. Dominic University told international media. – If there is a 1% chance that the last queen of Egypt is buried here, I must find her last resting place. If we discover the tomb, it will be the most important discovery of the 21st century. If we don’t find it, we’ve already identified important finds inside and outside the temple.”

An ancient tunnel 1400 m long and 1.8 m high, discovered at a depth of 13 m and, according to some archaeologists, may lead to the tomb of Cleopatra and Mark Antony.

The archaeologist also supports the belief that she may be close to the discovery of the tomb of Cleopatra by the fact that the queen was identified with Isis, the sister and wife of Osiris, and temples of both deities were found in the excavation area.

However, the notion that Cleopatra is buried at Taposiris Magna has not been widely accepted. Most scholars believe she was buried in Alexandria, and recently the archaeologist lost another valuable ally, the once-powerful figure in Egyptian archeology, Zahi Hawass. “There is no evidence that Cleopatra’s tomb could be in Taposiris Magna,” says Hawass, who has worked with the team for more than a decade. He agrees with those who claim that the desired tomb is not far from the palace of the Ptolemaic queen, and today it may be below sea level. If this version is correct, there is a serious possibility that Cleopatra’s burial site will never be found. It is worth noting that a few years earlier, he had a completely different point of view and publicly announced that the great discovery was already close. Lately, however, he has turned to Nefertiti, whose grave he recently promised to announce soon.