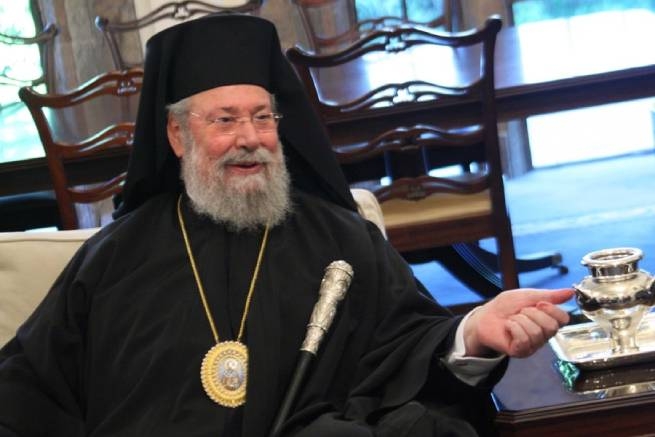 The head of the Greek Orthodox Church of Cyprus, Archbishop Chrysostomos II, died at 6:40 am on November 7, 2022 at the age of 82.

For the last 4 years, the archbishop suffered from cancer, and before his death, he was in the capital of the Republic of Cyprus, Nicosia. The testimony released by the doctors states that he “died peacefully, having passed through painful trials with courage, patience and Christian fortitude.”

The statements of the head of the Cypriot Orthodox Church, his interference in the politics and finances of the state awed both the archbishop’s supporters and ill-wishers, attracting the former and bewildering the latter. The obituary states that the archbishop left behind a legacy enriched by his “vision, courage, respect and restoration of the historical tradition of the church, as well as innovations that have always been aimed at the unity of the church.”

The archbishop never hesitated to express his personal opinion. Once, for example, he reprimanded Dimitris Christofias, the former president of Cyprus, saying that he should take a good look at himself because, having become president, he “got a prosperous and happy country, and left it, bringing some to a half-starved state.”

Chrysostom scolded bankers and politicians, calling them “thieves” for running away from responsibility while “the poor citizens of the island paid” for their disastrous decisions. He once threatened that he would not hesitate to call on the people to rise up in order to prevent technocrats from “sowing chaos” in the country’s banking sector. With his statements about the financial sphere, the archbishop drew a stream of criticism, claiming that he behaves more like a businessman and banker than a spiritual leader.

Previously, Chrysostom openly attracted Russian investors and enjoyed the political support of the Kremlin. However, relations with the Russian Orthodox Church deteriorated hopelessly after the archbishop supported in 2020 the decision of the Ecumenical Patriarchate to recognize the independence of the new Ukrainian Orthodox Church.

Chrysostom was always open about his right-wing views in politics and was not afraid to use his influence to correct the opinion of the Holy Synod even before he became the head of the church. His rise as the leader and head of the Orthodox Church of Cyprus since 2006, when his predecessor was no longer able to perform his duties due to poor health, reveals him as a skilled politician in church affairs.

The head of the Orthodox Church of Cyprus is elected by the parishioners in conjunction with the opinion of the college of clergy, a tradition that goes back centuries. Chrysostomos II, who was hardly the favorite of the people and who was behind the two leaders in the voting among the laity, outran his rivals, having secured the support of the majority in the collegium and won.

Chrysostomos (in the world Herodotus Dimitriou-Englistriotis) was born on April 10, 1941, having decided early on his religious vocation: he entered the famous Cypriot monastery of St. Neophytos as a lay brother immediately after graduating from elementary school. The future archbishop steadily moved up the church ladder until 1978, when he was elevated to the rank of bishop of his native Paphos.

As an archbishop, Chrysostomos significantly strengthened the state of the church budget and carried out a number of reforms, restored the independence of the church in decision-making, strengthening the Holy Synod by ordination of new bishops and the development of a new basic law.

Chrysostomos opened a church office at the European Union headquarters in Brussels and was a strong advocate of closer relations between the Orthodox and Catholic churches. In 2022, in an interview with the Cypriot state channel CyBC, the head of the Cypriot church said:

“I want to do real work, not just for show. I came and I know that I will eventually leave, and therefore I want to leave something behind for our country. That’s what’s important.”

Holy Synod, the supreme governing body of the Church, will meet to arrange a funeral head of the Greek Orthodox Church of Cyprus, Archbishop Chrysostomos II.