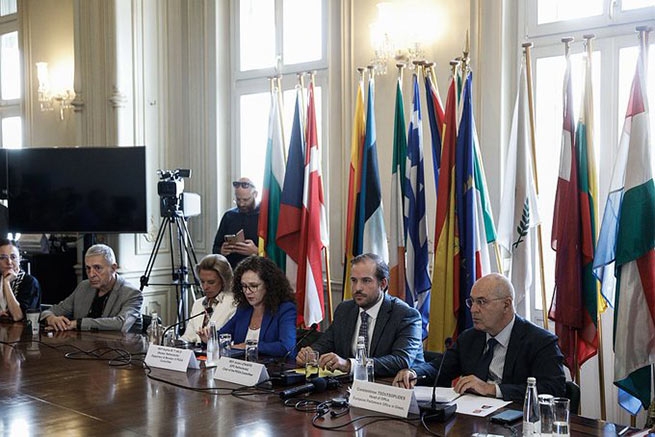 PEGA, the European parliamentary committee investigating the use of spyware in a bloc of 27 countries, on Friday urged Greek officials to do more to shed light on a phone surveillance scandal that targeted opposition politicians and journalists.

“We have learned a lot, but we also feel that many of our questions still need to be answered,” committee chairman Jeroen Leners said after a fact-finding visit to Greece and Cyprus, a member of the European Union.

Committee rapporteur Sophie in ‘t Weld said that while there was no concrete evidence of who installed and used Predator spyware on Greek victims’ phones and why, “everything points to people in government circles.”

The scandal that rocked the government this year was that the secret service EYP tapped the phone of opposition party leader Nikos Androulakis. Incumbent Prime Minister Kyriakos Mitsotakis said he had no knowledge of the operation, which he said was legal on national security grounds but wrong. The head of EYP and a close aide to Mitsotakis have resigned.

The Predator spyware targeted Nikos Androulakis, head of the country’s third-largest left-wing PASOK party, as well as another opposition member of parliament and three journalists. The government denies the use of the Predator. Last month, a Greek parliamentary committee investigated the surveillance of Androulakis, but its overall findings remain classified.

Lenaers, the Dutch European legislator, said the Greek parliament’s investigation “[вскрыло] only a few facts and did not hear all the relevant witnesses.” “The committee’s final report should be made public,” he said at a press conference.

Yin’t Veld said her committee found no concrete evidence of who used the Predator and why. “And we won’t find that evidence until the authorities are willing to share official information with us,” she said, but added, “everything points to people in government circles.”

In’t Veld also accused the Greek authorities of not making much of an effort to investigate the use of spyware.

Developed by the Israeli company NSO Group, Pegasus can hack mobile phones and extract text messages, passwords, location, microphone and camera recordings. It is advertised as a crime-fighting tool, but many cases have been found of countries using it against dissidents, journalists, and political opponents. In Europe, traces of Pegasus or other spyware (in Greece there was a version of it called Predator) have been found in Poland, Hungary and Spain.

“I think it’s safe to say that the situation in Greece is not comparable to Hungary and Poland,” Lenaers said. He noted that in Poland, where traces of the use of Pegasus were found, “we definitely see a complete absence of any checks and balances.” “At the moment, things are different in Greece, but … there are pressing issues (which) require clarification and a full investigation needs to be carried out,” he said.

The government has said it will increase accountability at EYP and plans to ban the use of spyware by private entities in Greece. A.P.

PS Greek Watergate, as it was called by local journalists, did not take place. The opposition was unable to insist on an investigation into the wiretapping, as it did not receive support from the justice authorities, which closely cooperated with the ruling party, and during this time, according to information from EYP employees, all traces of the crime were destroyed. However, as experience shows, the topic will be raised again either before the parliamentary elections in 2023 or after. Naturally, in the event of the defeat of the “New Democracy” …