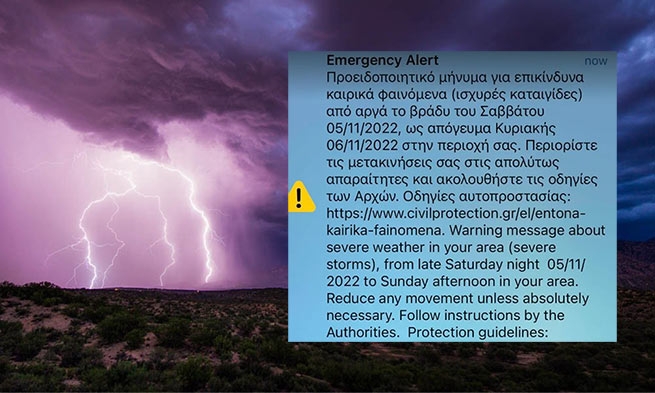 Shortly before 19:00, bad weather message 112 was sent to residents of the Attica metropolitan area, who were frightened by the unexpected “red alert” message.

Earlier at 18:00, during an emergency briefing by the Office of Civil Protection regarding bad weather outside, it was announced that a warning would also be sent to the people of Attica.

Storm warning for all: message 112 for Attica

“Severe weather warning message (severe thunderstorms) from Saturday 11/05/2022 late afternoon to Sunday 11/06/2022 noon in your area.
Limit your movements to those absolutely necessary and follow the directions of the authorities.”

Cyclone Eve is expected to pass through Attica from late tonight until early tomorrow, Secretary General of Civil Defense Vassilios Papageorgiou said at an emergency briefing he held some time ago with Deputy Fire Chief Ioannis Petroutzos about the impending cyclone. At the same time, he gave a strong recommendation to residents of areas where bad weather is expected, Limit your movements to what is absolutely necessary.

Cyclone Eve hit the western part of Greece this morning and is gradually affecting most of the country with dangerous weather events in places that have as their main characteristics increased precipitation rate, high frequency of lightning and strong winds, but no problems have been recorded so far associated with floods.

In addition, according to him, today a message was sent to 112 residents of the southeastern Peloponnese, and yesterday two warning messages were issued to residents of the Ionian Islands, the regions of Epirus, Western Greece and Messinia, strongly recommending that travel be limited to absolutely necessary during the passage of the cyclone.

In addition, he stressed that, depending on the development of the situation and the information they will have from EMY, other 112 messages will be sent if necessary. All civil defense forces have been placed on maximum alert and vigilance to deal with any flood emergency.

“We strongly advise citizens to be extremely careful and strictly follow the instructions of the Civil Defense. We especially emphasize:

What meteorologists predict for Attica.

“Attica will be affected by bad weather from late Saturday night 05-11-2022. From the west of Attica, a thunderstorm will begin around midnight and last until approximately 16:00 Sunday 06-11-2022,” EMY’s emergency weather hazard bulletin said today.

“In particular, in the prefecture of Attica and the city of Athens, heavy rains and thunderstorms will occur from Sunday night, accompanied by increased thunderstorm activity, increased gusty winds and, possibly, local hail. Strong periodic phenomena are expected until Sunday afternoon,” Meteo reports.

We also recall that the Secretary General for Trade in his statement said that a decision had been made do not open stores tomorrow as planned.