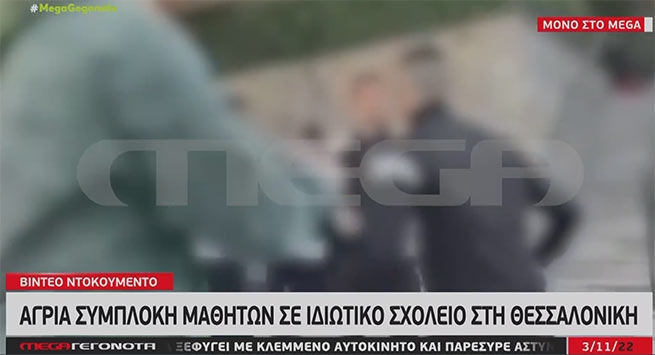 As shown in the video, dozens of students stabbed each other in the school yard, while scenes of severe beating of minors were shown.

According to MEGA, the fight was started by a 17-year-old teenager who started beating a classmate who was held tightly by his friend. He was then attacked and severely beaten by other schoolchildren in the yard, as a result of which he was taken to a private clinic where he received stitches in his face to stop the bleeding. The young man who started the fight was at risk of losing sight in one eye, and the parents of the students complained that this was not the first time that everything had gone wrong at the college in question.

The college management called all the defendants in the case, as well as their parents, and it was decided to permanently exclude four students.

A statement regarding the violence was made by the private college “DELASAL” in Thessaloniki:

“After sending and spreading incorrect and incomplete information on the occasion of the recent unprecedented incident of violence among high school students, the likes of which have never been seen in the 135 years of DELASAL College, and considering not only the scale of the problem, but also the impact of this publicity, in the first place on the mental health of our students, the college administration would like to clarify the following:

– From the very first moment of the confrontation between the two students, after they left the school on October 25, 2022, our teachers acted as mediators, as they were supposed to, to defuse the situation.

– On Tuesday, November 1, 2022, we received information about cases of bullying that occurred outside of the school, and on the same day called in students and mediator teachers to immediately restore the atmosphere of peace.

However, in continuation of the previous incident, two students had an argument with each other in the middle school yard, and four others attacked one of them, who was immediately given first aid by the school nurse. The parents of the injured student were notified and he was taken to the hospital for further examination. All students involved in the incident were expelled, and the four students who used physical violence were permanently expelled from the college, as according to the College Regulations, physical violence and insults are unacceptable from whatever source.

-According to existing legislation, changing the school environment ensures an orderly return of students to the learning process, both those who are expelled and those who have been attacked.

From the outset, college staff and administration have shown not only a quick reflex response to the two incidents that occurred on campus, but more importantly, concern for the physical and mental health of all of our students, even when bullying occurred outside the school, and therefore it was cannot be controlled by us.

In addition, we immediately offered our concern and all available resources to manage and defuse the situation by talking to high school students so that they understand the serious consequences of such incidents. We also organized interviews with the school’s mental health counselors. In addition, we have informed the parents of the students, with whom we have maintained open communication and dialogue from the very beginning, in order to jointly ensure the peace of mind of our students.

Each incident of violence in a school context traumatizes not only the victim, but also classmates, teachers and administrators. With strict adherence to the rules in every instance of violence, we work to ensure that every day in the classroom is peaceful and it is of the utmost importance that all participants are supervised by experts to help them reintegrate smoothly into the school environment. We maintain an open channel of communication with parents and students in order to immediately restore their emotional and cognitive state, peace of mind. A new briefing for parents and high school students is already planned.

DELASAL College is a place of life, freedom, solidarity, dignity, creative expression and hope and will always provide a safe environment for its students..”