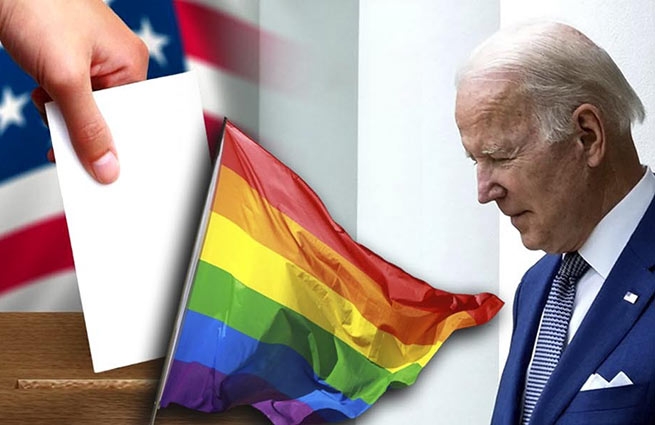 There are literally a few days left until the US midterm elections on November 8, and LGBTQ+ trying to take them by storm after the number of candidates increased by 20% compared to the previous elections!

What is happening now is a clash of two worlds: the old world with traditional values, where there is gender, the institution of the family, country and religion, and the new world, which some extremist circles in Washington, who control the Democratic Party, want to impose on our entire planet by any means and ways.

A world in which there will be no gender, no family, at least in the form in which we know it, no homeland, no borders, no national origin.

Religion will be replaced by another kind of religion – the religion of materialism (for those who know about eosphorism).

Those who want to remain traditional people will not fit into this new world.

The conflict in the US midterm elections will be of great importance, at this stage more important than the presidential election.

LGBTQ+ the US community as a whole (about 90% of the candidates belong to the Democratic Party) supports US President T. Biden, whose 670 members participate in the midterm elections.

For the first time in US history, lesbian, gay, bisexual and transgender people will participate in the midterm elections in all 50 states of the country.

Prominent among the candidates are Democrats Tina Kotek and Maura Healy, who could become the first lesbian governors in their respective states of Oregon and Massachusetts, respectively. And Becca Balind has every chance of becoming the first lesbian congresswoman in the state of Vermont.