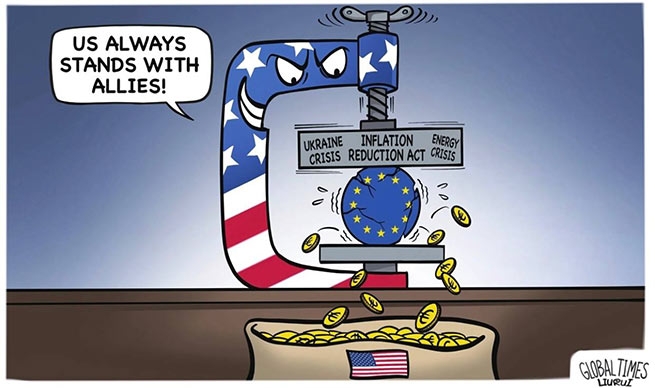 European heavy industry is going through a difficult period. High energy prices and fuel shortages caused by US-initiated sanctions against Russia have brought nearly 10% of crude steel production and half of primary aluminum production to a halt.

Fertilizer production has only recently halved, and groups such as Norway’s Yara warn that production cuts will lead to food shortages.

The fuel crisis seems to be easing (or rather, being postponed for a while). But the problems it caused will hang over European corporate (strategic) decisions for years to come. As companies invest in clean energy and improve energy efficiency, some are also rethinking its geographic presence.

The US now has a rare opportunity to attract European multinationals at a time when everything is fluid in supply chains. The pandemic-related shortages, combined with efforts to reduce carbon emissions, are forcing business leaders to reconsider partnering with suppliers far away in jurisdictions where costs are low. Growing tensions between China and the West are also changing the rationale: German FDI in China fell during Covid and has not recovered.

As companies decide which units to upgrade and when, it makes sense to start somewhere else, and energy costs will clearly come into play. Here again, the US has a critical advantage over Europe: natural gas supplies are local, reliable, and consistently cheaper, although the price gap fluctuates wildly.

Take Shell, for example, which in 2016 decided to build a $6 billion petrochemical plant near Pittsburgh, Pennsylvania, in part because it was close to natural gas sources. The British energy group has just completed construction and plans to start producing plastic by the end of the year.

Outgoing chief executive Ben van Beurden described the project as part of a “pivot to an America that appears to have a structural advantage, certainly now and perhaps in a few years.”

Like many other European companies, Shell has also chosen (to build) a plant near potential US customers. But other companies that have invested in local production for Americans have found that the US can be a good base for exports. When Mercedes opened a plant near Tuscaloosa, Alabama, in the 1990s, it was trying to enter the US market. Now the plant is five times larger and assembles all of the German company’s large SUVs, and two-thirds of them are exported. This early decision to choose Alabama continues to resonate. Mercedes recently decided to build its electric SUVs in the same location, opening a local battery factory to supply them.

Ironically, energy is now a magnet for companies considering expanding into the US. Back in the 1970s and 1980s, rising energy prices contributed to a decline in US steel production. But the shale revolution has changed the dynamic, and Russia’s invasion of Ukraine has raised questions about security of supply.

“In 20 years this could all be over,” says Stephen Schork, an energy analyst. “But it is known that US natural gas is the cheapest in the world (?) and will remain so for some time.”

As companies reduce their carbon footprint, fossil fuel prices should become less important. However, the US is seeking to expand its energy advantage with the recently passed Inflation Reduction Act (IRA). Proponents believe that US wind and solar power, as well as green hydrogen, which is produced using renewable energy sources, will soon become some of the cheapest in the world. “The IRA adds to the strategic advantage that the US already has”…and allows the sector to become the dominant energy supplier in a low-carbon economy,” Credit Suisse analysts wrote.

However, important as they are, energy prices do not always lead to investment decisions. European business leaders also want stable policies and a properly trained workforce.

The US culture wars against everything from abortion to hiring diversity and vaccines are painful for outsiders, and the US job market also remains tight, exacerbated by political stalemate over immigration policy. Some executives also fear that growing partisan strife over green investment will cause problems for companies. EUthat must comply with climate change mandates set by Brussels.

The Russians have provided the US with an opportunity to attract significant foreign direct investment into its industrial sector—unless politicians make that opportunity disappear.